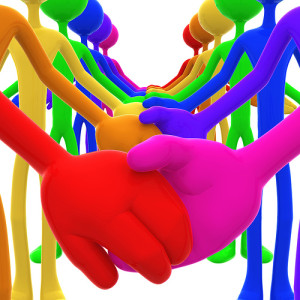 So, don’t hear me say that breaking down the barriers in our churches is easy. It’s not. In fact, I fully understand it might truly be impossible.

But the reality of the lordship of Jesus and the Kingdom of God, the urgent message that Jesus is Lord and that he’s fixing everything, compels us to try. We have to try. Together.

“All the believers were together and had everything in common. Selling their possessions and goods, they gave to anyone as he had need. Every day they continued to meet together in the temple courts. They broke bread in their homes and ate together with glad and sincere hearts… And the Lord added to their number daily those who were being saved.” ~Acts 2:44-47

“They were all filled with the Holy Spirit and spoke the Word of God boldly. All the believers were one in heart and mind. No one claimed that any of his possessions was his own, but they shared everything they had. With great power the apostles continued to testify to the resurrection of the Lord Jesus.” ~Acts 4:31-33

“All the believers used to meet together in Solomon’s Colonade… more and more men and women believed in the Lord and were added to their number.” ~Acts 5:12-14

“The Word of God spread. The number of disciples in Jerusalem increased rapidly.” ~Acts 6:7

The Word of the Lord, the message, the Good News spread rapidly and with Holy Spirit power through the way the Church was living. Their lives together in Holy Spirit community was the proclamation.

Karl Barth said, “Grace is the enemy of everything.” He claimed that grace is what declares to the world that all the powers have been defeated. Jesus said the Kingdom of God is like a woman who mixes a little bit of yeast into about 60 pounds of flour until that yeast has worked all through the dough.

A little bit at a time. One act of grace here. Another act of mercy there. Forgiveness in this situation. Sacrificial love in that circumstance. Service. Justice. Generosity. Subversive acts that disrupt and reverse the world around us until the world around us has completely changed. It’s completely different. That’s the Kingdom of God.

And we proclaim it when we live it. Together.