“God is the King of all the earth; sing to him a psalm of praise.
God reigns over the nations; God is seated on his holy throne.
The kings of the earth belong to God; he is greatly exalted.”
~Psalm 47

A little more than 24 hours after returning to Amarillo, I’m completely recovered from the overnight flight from Santiago and totally back in the groove. It’s amazing what a couple of Sunset Enchiladas at Ruby Tequila’s and some Diet Dr Pepper will do for a guy. As always, you can enlarge the pictures by clicking on them. 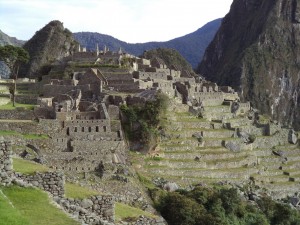 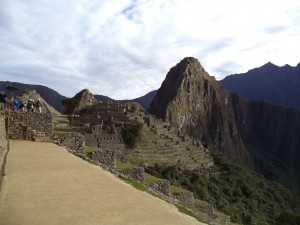 As for physical thrill and sheer amazement, the highlight of our eleven day tour of Great Cities Missions church plants in South America, for me, was the sightseeing and mountain climbing at Machu Picchu. The 15th century royal palace and housing for the Incan Emperor Pachacuti and his government and religious officials is the most familiar of all the historical and archaeological sites of Incan civilization. It’s called the City of the Incas, about 50 miles northwest of Cusco, Peru. And every square inch of the nearly 600-year-old ruins and the surrounding landscape and geography is breathtaking. Figuratively and literally. Breathtaking.

We began the day early, crawling up the steep and winding Bingham Highway in a tour bus at 7:00 am. Our group of seven spent a couple of hours just climbing in and around all the ruins, taking tons of pictures and marveling at the architecture. How did they terrace these vertical slopes for farming? How did they cut and chisel all these stones to such magnificent perfection? How did this massive complex and sacred site go undiscovered until 1911? Are we really going to climb that straight-up-and-down sheer black mountain in front of us?

Yeah, we climbed it. It’s called Huayna Picchu (it means “new peak”; Machu Picchu means “old peak”) and it rises sharply in front of and towers dramatically over the ancient ruins. It dominates the landscape. It’s imposing. Intimidating. And we climbed it. 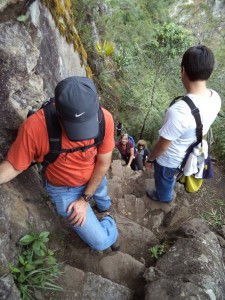 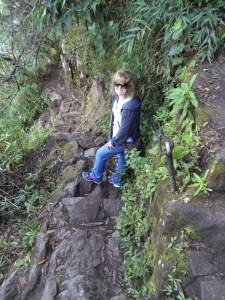 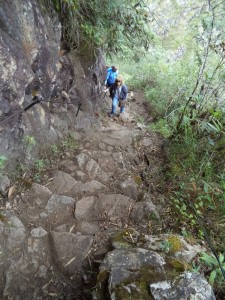 The steps to the top are actually cut into the mountain, all the way up. And they really shouldn’t be called “steps” at all. It’s more like creative places to put your feet. Very narrow. Very steep. At some points the trail is too narrow to pass someone in front of you. At most points, the view of the ruins, the highway, and the landscape is simply spectacular. At every point, it’s downright thrilling. The very thought of climbing around where the original Incans lived and worshiped is humbling. The idea that a slip and fall might possibly be fatal for you and anyone walking next to you is nerve-wracking. The burning in my calves, the diminished capacity of my lungs, the nervous laughter at the absurdity of it all was overwhelming. So beautiful. So cool. So “am I really doing this?” over-the-top exciting.

We climbed it together. And by “together” I mean we and everyone we saw while we were on the mountain. We met young people from Granbury and San Antonio and talked about the Rangers and Spurs and took each others’ group pictures. Once they passed us, we overheard them explain to their friends from Oklahoma that all Texans are family and we always ask each other our home towns. We were encouraged by the young people who were coming down from the top and telling us it was worth it. Keep going, they said, it’s worth it. We laughed when the group of five young men passed us, one of them declaring to the other four, “We can talk when we get to the top! Let’s go!” We realized very quickly that we were just about the oldest people making the climb. And that at once worried us and made us feel so very good.

As we got closer to the top, John Todd and Kami took some pictures on the “Stairs of Death.” Then we climbed a little makeshift ladder secured to the side of the cliff, squeezed through a very narrow tunnel cut through the rock, and arrived at the summit. It took about ninety minutes. And any pictures you’ve ever seen, including these in front of you now, don’t do it justice. Not even close. It’s completely indescribable. I highly recommend it. 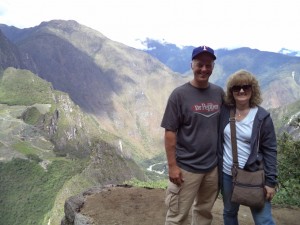 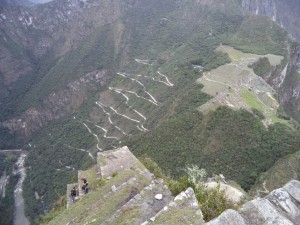 Naturally, such an experience leads one to reflect and to thoughtfully consider one’s place in the universe and in our God’s great plans. This city, these temples and palaces, this Incan civilization of great thinkers and builders in this Cusco region of Peru were completely wiped out by the Spaniards less than a hundred years after it was all built. They completely dropped off the map. They disappeared. One mighty nation taken apart and destroyed by another. Incan temples torn down and Spanish churches erected on top of the rubble. Incan palaces reduced to ashes by another people’s rulers and armies. Incan homes and families obliterated by an invading nation. It was so thorough. And it happened so fast.

The Spanish actually destroyed all the Incan buildings and built their own palaces and churches and homes on the foundations. They used the Incan foundation stones for their own construction projects. They built on top of what had been laid before. You see clear evidence of this all over Peru. Similarly, I’ve seen the same thing in Israel. Columns from first and second century homes used as thresholds for doorways in Roman homes built on the same spot. Those Roman stones then used in subsequent buildings constructed by the Byzantines and Crusaders centuries later.

It really has a way of working on you.

I don’t know when or how the American Empire is going to be destroyed. Neither do you. What we do know is that it will be destroyed. At some point, another people is going to crush and wipe out what you and I know today as the United States. The question about that is not “if;” it’s “when” and “how.” 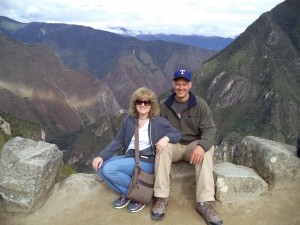 Christians should not be too disturbed over that. One, our God is the God who raises up and destroys nations for his purposes. He is in charge of the coming and going of peoples and powers. Our God reins. He alone is sovereign over the affairs of this world. Regardless of when and how it happens, we will forever serve and belong to the ultimate ruler who loves his people and promises to provide for them in all circumstances. Two, we do not belong to the nations of this world. We are citizens of an eternal Kingdom that is not of this world. We are subjects in a political Kingdom that can never be abolished or destroyed, we are residents of everlasting dwelling places that will never fade, we are children of the Father who controls all of it in limitless love and perfect righteousness.