I have no idea why Jerry Seinfeld is playing in Midland, Texas tonight, but I do know Carrie-Anne and I will be on the floor of the Wagner-Noel Performing Arts Center in our seats in the middle of Row 12! It’s a Christmas present from my super-cool wife and I’m excited beyond description. I’d drive to Midland to watch Seinfeld read a phone book. 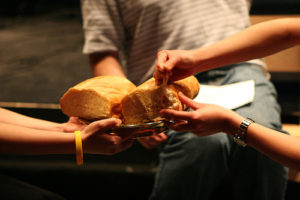 Once a month our covenant group gets up early and serves breakfast to the folks staying at the League House. We hang out for a couple of hours and pray with people from out of town who have relatives in the hospitals here. A couple of weeks ago we met a guy named Jeff (not his real name) who’s from the Austin area. He and his wife and three kids had come up to be with Jeff’s brother who was in serious condition after suffering a terrible brain aneurysm.  As we’re talking with Jeff and hearing his story, he mentions that his wife is from Vietnam. Then, later in the conversation, Aleisha asked him, “How did you meet your wife?” And he told us a fascinating story.

The company he works for in Austin is headquartered in the D.C./Virginia area and they regularly send a woman from there to train the employees in Austin. This woman’s originally from Vietnam. So Jeff and this woman get to know each other in a friendly, working relationship kind of way. And one day she calls Jeff from Virginia, from completely out of the blue, and says her family is looking for someone to marry her sister so she can come to the states.

“What?”
“Yeah, my sister can come to the U.S. if she has an American husband. So, if you know anybody who might be interested in helping us out…”
“I don’t know anybody who’d actually want to get married.”
“No, they don’t have to stay married. Only for a year or two. Then they can get divorced and she can stay in the U.S.”
“No, sorry, I don’t know anybody.”
“We’d pay him money.”
(short pause)
“Um… How much money?”
“We’d pay him $30,000.”
“Well, I think I might could get interested in that!”

So, Jeff agrees to do it. He’ll marry this lady from Vietnam, pocket the $30K, and they’ll split up later.

Now, here’s the catch. Jeff had to take three or four trips to Vietnam to sell everybody over there that it was legit. The family paid for the trips, but Jeff had to go to Vietnam to spend time with her. They had to go on dates together, eat dinner together, spend time with her family. They had to take a lot of pictures together and post them on social media. And the most important thing: when he’s in Austin, he had to write her letters. He had to call her and facetime her and send her gifts. He had to act like he was in love with her. He had to do things a guy in love would do.

And in the middle of all that, Jeff fell in love with her. For real.

He never would have thought himself into loving this young lady. He never could have studied himself into loving her. But he acted himself into it and he didn’t even know it was happening. He was forced by the circumstances into some habits that actually changed his feelings and his thinking. Doing what people in love do shaped him into a guy in love. They were married 14-years ago, they have three children, and he never took the $30,000.

Why do we go to church? We go to church because it makes us more like Jesus. Church is one of the main habits, one of the critical spiritual practices that shapes us into the people of God. 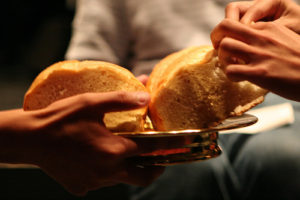 It’s hard to think yourself into loving others. It’s difficult to study yourself into considering the needs of others more important than your own. Being together around Word and Table puts us in the circumstances and into the habits that will, by God’s grace and the power of his Holy Spirit, actually change our feelings and thinking. Doing what Jesus does shapes us into the image of Jesus.

So many of us grew up going to church. It’s a habit of our lives that started before we can remember and possibly one that we sometimes see as very ordinary. Maybe even humdrum and boring. We can do church with our eyes closed, and sometimes do.

But what if we understood our church gatherings as sacramental encounters with our Lord? What if we believed God’s Spirit was powerfully at work during our songs and prayers, during the Scriptures and the meals, to transform us into the image of Christ? What if we allowed ourselves to be swept up into the habits of the church as formation practices through which our Lord meets us and moves us into better fitness for eternal life? What if we were filled with awe at the possibilities in front of us? What if we were filled with awe in the face of a vision of how we can be and how the world will be in the future? And what if that awe increases as the power of God’s Spirit heals us and transforms our lives?