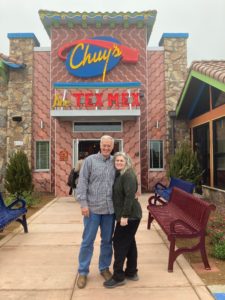 Praise the Lord and pass the chips and salsa! The newest Chuy’s location right here in ruggedly beautiful Amarillo, Texas finally opened yesterday and, yes, of course we were there!

Carrie-Anne, Carley, and I vowed to skip lunch yesterday and then meet at the brand new Chuy’s at 4:00pm to beat the opening night dinner crowd for a super early supper. We walked right in – no wait! – and took our seats under the Chuy’s hubcaps and among the Chuy’s palm trees and had our chips dipped in Chuy’s amazing made-from-scratch queso in about two minutes.

Carley and I went with the traditional Chicka-Chicka Boom-Boom, the roasted pulled white meat chicken enchiladas with the famous Boom-Boom sauce, a spicy blend of New Mexican Hatch green chiles, tomatillos, cilantro, and cheese. C-A ordered up her favorite crispy tacos in those homemade shells. And we just had a blast. 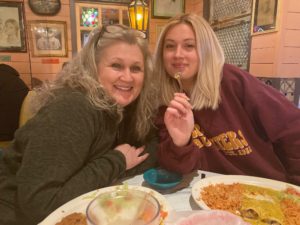 I have mixed emotions about famous region-specific restaurants expanding their reach outside of their territories. Chuy’s is an Austin original. Carrie-Anne and I would eat at the original Chuy’s on Barton Springs Road when we lived in Marble Falls back in the ’90s and the Chuy’s on Lamar has been our go-to Tex-Mex spot in Austin ever since. It’s nostalgic for me. It reminds me of the Texas Hill Country and great friends, when our kids were little and we lived in our first house on Hackberry, when C-A and I were trying to figure out marriage together, and life. I remember thinking it was weird when I first saw the new Chuy’s on I-35 in Waco in 2008. Shouldn’t you have to go to Austin to eat at Chuy’s? Up until ten or eleven years ago, all fifteen Chuy’s were in Texas. But on a family trip to Disney World in 2014, we saw one in Orlando, Florida. We were appalled! And we ate there twice!

It’s like the Chicago company buying Whataburger and planning to expand all over the country. I think it’s great that folks in Detroit and Boston might someday get to enjoy a #1 with cheese and everything on it, dip their fries into Whataburger’s spicy ketchup, and wash it down with a Dr Pepper shake. But shouldn’t you have to be in Texas to do it? Does it water down the whole thing if you can get it anywhere?

It’s weird to have a Chuy’s in Amarillo. And it’s great! I just might see you there today at lunch.