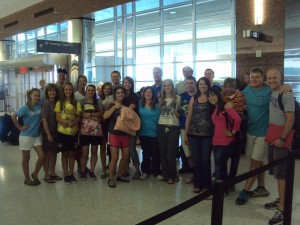 Our congregation’s partnership with God and the redeeming work he’s doing in Brazil is something we at Central truly treasure as a legacy that’s been handed down to us and is worthy of our honor and respect. We’re grateful for the ones who took the Gospel to Brazil ahead of us; we’re so thankful for the formation of Great Cities Missions; we’re honored to join forces with the great Christian missionaries who have sacrificed and served in Brazil in the name and manner of our King. What a tremendous blessing!

And now we’re personally rolling up our sleeves to join that venture in the flesh. 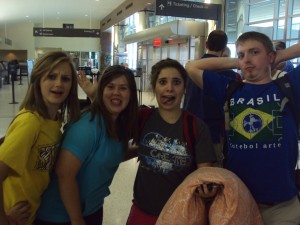 A whole bunch of our Central teenagers and just enough adults to make it work took off this afternoon for Sao Paulo, the largest city in Brazil. Our two oldest daughters, Whitney and Valerie, are right in the middle of it, excited for the chance to meet our missionaries down there and to work with them in showing the more than eleven-million people in that city the love and grace of God. They’ll be painting rooms at a church, playing with kids at an orphanage, and putting on a VBS for the community. There will be worship time and service time, prayer time and door-knocking (clapping) time. They’re going to Brazil to help change things for Christ. 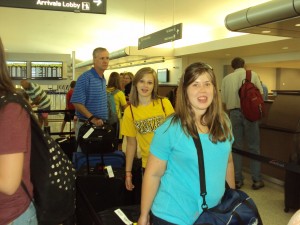 s time to change them, to shape them, to further transform them into the image of our Lord. We pray that our King uses them to his eternal glory and praise, but that he also uses this opportunity to show them what a huge eternal Kingdom we belong to. I want my girls to experience personally what God is doing in other countries, in other cultures, in other ways. I want them to know first-hand that we Christians in America are not the only ones that matter. I want them to see that God works in ways that are wholly unfamiliar to us. I want them to be convinced that God loves all mankind as much as he loves them (us). I want them to be certain that Christians in the United States don’t have the market cornered on God, that none of us has him or the way he operates figured out and neatly packaged in a convenient and comfortable pattern we can all identify and feel good about. I want them to see — to really see! — that our God is wild and he’s on the move; he’s unpredictable and unstoppable; he’s bigger and better and more wonderful than we’ve ever imagined; and he is saving his children of every tongue and nation and tribe and land without discrimination and without end.

God, please show them your glory.

Carrie-Anne and Carley and I are leaving Amarillo Wednesday to hook up with this group in Sao Paulo and, after four days, take Whitney and Valerie with us to catch the first four days of another Central group’s trip to Brasilia. And we can’t wait. What a joy, to be able to share this life-changing, spirit-transforming trip with our entire family! Thank you, Central! Thank you, Lord! 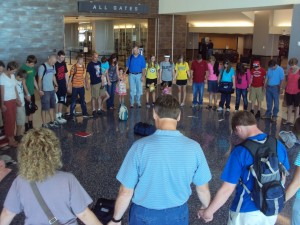 Yes, we really did just put our two oldest daughters on a plane to Brazil with Adam Gray.

And we’re so full of gratitude and peace. May our God’s will be done in Sao Paulo and in Amarillo and in the lives of his children in both places just as it is in heaven.