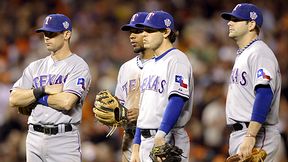 So, the Giants go more than four weeks without scoring more than five runs in a game; now they’re the first NL team in history to score nine or more runs in the first two games of the World Series. San Francisco scores six runs or more in an inning just five times the entire regular season; now they’ve done it twice in two days. Edgar Renteria has only hit one homerun since July 27, and that was over eight weeks ago; until last night. C. J. Wilson’s only given up ten homers all year. Last night’s was huge. And how does Kinsler’s fifth inning homer bounce off the top of the wall back into play for a double? That bounce defied all the eternal laws of physics!

Yes, Cain and Lincecum have been tremendous. Yes, the Giants are getting some really timely hits. But this 0-2 hole isn’t about the Giants. And it’s not about fate or luck. It’s about the Rangers.

Young and Hamilton and Cruz are hitting a combined .120 in the World Series. Young is 1-8. So is Hammy. Last night the Rangers went 0-8 with runners in scoring position.

Q: How many Rangers relievers does it take to get one out?
A: Three 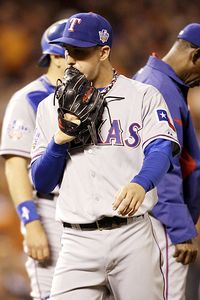 the dugout, I concur! He throws 13 pitches, 12 of them balls, and walks the only three batters he faces. As my great friend, Jim Gardner, told me this morning, Holland is the new Walker, Texas Ranger.

Is it so impossible to leave O’Day out there for more than one batter? Why is Holland even out there? And what about Lowe and Kirkman? Who are Lowe and Kirkman?!? Is Ogando not an option? Feliz didn’t pitch in Game One and today is a day off. What are we waiting for with him, to be available for the first game of the Cactus League?!?

Only eleven teams have ever come back from an 0-2 hole to win the World Series.

Colby Lewis could be the stopper we need. It could all turn around tomorrow. The lineup will be back to normal. The Rangers had the best home record in baseball this year. The games will be at night. The fans will be sporting claws and antlers instead of pandas and beards. The Rangers are not done yet. There’s still a chance Washington knows something we don’t. There’s still a chance he knows what he’s doing. He’s proven most of us wrong all year.

In our efforts to run away from old 1950s & 1960s Church of Christ sectarianism, I fear we’re in danger of mindlessly trashing good traditions and leaving behind strong concepts and words. Now, don’t get me wrong, we do need to run very, very fast away from any form of sectarianism. That should be condemned in all of its various evil forms. But sometimes in our zeal to be different, we tend to go overboard the other way.

Have you noticed that we don’t use the word “convert” anymore?

He is a convert. When did she become a convert? Fourteen men and women were converted during our mission trip.

We don’t use that term anymore. Maybe it’s more cultural than theological. It’s possible we don’t even realize we don’t say it anymore. It’s probably not a conscious decision. But I think it does have consequences.

Shane Claiborne, in his book Jesus for President, says this about conversion:

“We need conversion in the best sense of the word — people who are marked by the renewing of their minds and imaginations, who no longer conform to the pattern that is destroying our world. Otherwise we have only believers, not converts. And believers are a dime a dozen nowadays.”

What the Kingdom really needs is a bunch of people who believe so much in Christ and in the salvation of the world that we cannot help but live it. We believe so much in God’s righteousness and justice that we enact it. We’ve been changed so much by Jesus’ love and mercy and forgiveness that we take it and bring it and share it!

Even the demons believe and shudder.

I can’t help but leave you with this picture of Carley. As part of their annual Red Ribbon Week to raise drug and alcohol awareness, today is 50s day at Green Valley Elementary. She’s definitely the cutest girl at the sock-hop!