Around the Table: Part 9b 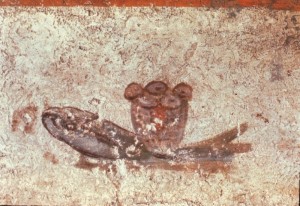 The most destructive shift for the Lord’s Supper — from celebratory feast to solemn snack — occurred in large part as a result of the legalization and official recognition by the Roman government of Christianity as a legitimate religion. Once Emperor Constantine recognized Christianity in 313 AD, made it official seven years later, and then made it mandatory throughout the empire in 321 AD, the marriage of church and state was on. In a hurry. And the form of the Lord’s Meal, which largely shapes the meaning and message of the Lord’s Meal, took one of the biggest hits.

The first and most dramatic thing that happened was that churches began to meet on Sundays in official state buildings, big meeting halls and large auditoriums, instead of private homes. People of the empire were forced to be Christians, compelled by law to worship Jesus as Lord, so these bigger buildings not only served to legitimize Christianity, they were the only venues able to accommodate the larger numbers of worshipers. As Kierkegaard famously said, “When everybody’s a Christian, no body’s a Christian.” And this was true in the 4th and 5th centuries. Augustine, writing at the end of the 4th century, claimed that only five-percent of those worshiping on Sunday were actually part of God’s true church. The new church buildings were full of nominal converts at best, outright unrepentant pagan sinners at most. John Chrysostom wrote about these worship services in the 360s:

“They pushed and pulled one another in an unruly manner during the services; they gossiped with one another; young people engaged in various kinds of mischief; and pickpockets preyed upon the crowd.”

Keep in mind, all Christian gatherings to this point, for more than 300 years, had included a full meal Lord’s Supper as the main event. With bigger crowds of barely converted Christians in state buildings instead of houses, this was becoming increasingly difficult to pull off. When they were able to stage the meal, abuses around the table became the norm. The problems with the Lord’s Dinner in 1 Corinthians — drunkenness, not sharing, divisions among classes — were getting out of hand here three centuries later. Attempts to correct those abuses eventually led to an official church ban on meals and tables in the church buildings. The Council of Laodicea, in 363 AD, made it official: no tables and no meals in the church buildings. The Trullen Council of 692 AD repeated the meal and table prohibitions of Laodicea, so that by the end of the 8th century, the full meal was no longer a part of any Lord’s Supper celebrations.

Consider for a moment the impact of the new innovation of the church building. When Christianity was legalized and mandated, the Church moved from meeting in small, intimate groups in one another’s homes to meeting in larger, impersonal groups in big auditoriums. The setting changed dramatically from a family fellowship around a kitchen table to a ceremony in a Roman state house. Instead of informal visiting and sharing around a table, Christians now sat in rows, looking at the backs of one another’s heads, and listening to a single speaker. Keep in mind, these were nominal converts. The Church was no longer an exclusive group of committed disciples. Not very many had experienced a true conversion. Most had an incomplete understanding of what it meant to be a Christian. Church leaders were unsure of how to handle it. Scholars and historians call it the Constantinian Shift. I refer to it as the Communion Killer.

The most damaging thing that occurred during this time is the shift from a celebratory fellowship meal in a resurrection context to a solemn and individualistic ceremony in a crucifixion context. This is the point in history during which the meal changed from a table event to an altar event.

Since these new Constantinian Christians were not completely committed to the faith, since the numbers of people in the assemblies were growing larger and their lives were increasingly at odds with the faith, church leaders resorted to attempting to scare these Christians straight. And they used the Lord’s Supper to do it. It’s during the late 4th and early 5th centuries when the doctrine of transubstantiation is developed: the bread and the wine actually turn into the literal flesh and blood of Jesus at the saying of the magic words of institution. If one is living his life in a way that doesn’t measure up, and then dares to ingest the holy body and blood of Jesus, he is eating and drinking himself straight into hell. 1 Corinthians 11:27-32 no longer meant that we are to share the supper with sacrificial and servant hearts, treating one another as brother and sister, honoring Jesus as the one who unites us forever. It meant look at your own life, examine your heart, see if you’re living the way you ought to be living Monday through Saturday, and then determine before you participate in this ceremony if you’re worthy. Those who were stealing from their customers or cheating on their husbands or struggling with pride or greed were eating their own damnation when they dared to approach the holy bread and cup. It’s during this time we see the communion instructions and, especially, communion prayers intentionally worded to scare the people into better lives.

In his written communion prayers in 350 AD, Basil made frequent use of the words “sinners,” “unworthy,” and “wretched.” Near the end of the 4th century, Cyril of Jerusalem wrote lengthy and complicated instructions on how to handle the bread and the cup, “careful not to drop a particle of it, for to lose any of it is clearly like losing part of your own body.” At the same time, Chrysostom referred to the communion ceremony as “that dreadful and fearful moment when the mysteries are accomplished at the terrible and awful table.” He demanded that Christians live their lives in a constant state of “purity of soul,” adding, “With this [purity of soul] approach the table at all times; without it, never!” In a communion prayer written in 380 AD, James encourages disciples of Jesus to “keep silence, and with fear and trembling stand; ponder nothing earthly minded…”

The communion meal was changing into a scary reflection of the crucifixion of Jesus. Over time, it actually shifted into a re-sacrifice, a re-crucifixion of Jesus. More pomp and circumstance was added to the ceremony, including a parade of priests and clergy who walked the bread and cup down the main aisle toward the table to symbolize Jesus marching to the cross. The white cloths used to cover the elements symbolized the burial cloths that covered Jesus’ bleeding and mangled body. The physical presence of Christ in the bread and the cup, the re-sacrifice of Jesus on the cross every Sunday was an awesome and fearful thing indeed. It evoked feelings of guilt and remorse, exactly what the priests were going for.

I don’t question the pure intent of the church leaders during this time. They were doing, I’m convinced, what they honestly believed needed to be done in order to faithfully express and live out the Gospel in their time. But, wow, did this profoundly change the form and the meaning and the message of the table of the Lord! It changed everything! And now, 1,600 years later, we’re still suffering the effects. By the end of the seventh century, eating and drinking with joy in the presence of a forgiving God and with his people, all blessed together by the gift of our loving God’s righteousness, celebrating an eternal relationship of acceptance and unity with our Father and his children, was no longer the focus of the communion words and prayers on Sundays. Communion was no longer interactive, it was silent. It wasn’t celebrative, it was solemn. It had been communal, but now it was individual. It was intended to deliver joy, but now it was bringing sorrow. Instead of thanksgiving, the mood became one of remorse. The original intent of the Lord’s Supper was fellowship, but it shifted to contemplation. Communion was practiced expressively in the Bible, but now it was an exercise in introspection. And instead of being focused on the Resurrection as the first century Christians were, the focus was on death.

It was an awesome and fearful thing. In fact, it was so awesome and so fearful, most Christians stopped participating.