Around the Table: Part 4 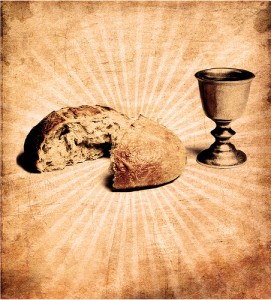 Have you ever wondered how the Church’s practice of the Lord’s Supper actually began? There’s no right or wrong answer to the question; the Scriptures don’t give us a time and a place or a lined-out history of communion practice among members of the early Church. But think about that just for a second. I believe the New Testament is full of communion references. I think we see Lord’s Supper practices both assumed and described in lots of places other than the obvious ones in 1 Corinthians and Acts. But how did it begin? Who organized the orchestrated the first official Lord’s Supper?

Consider that on Resurrection Day — Easter Sunday, the actual day of Christ’s coming back to life and walking out of that garden tomb — Jesus appears to his disciples and eats a meal with them. It’s the first time they see the risen Lord. At dinner time. Sunday night. And he joins them and eats with them. At dinner time. On Resurrection Day. Sunday night.

On Resurrection Day, Jesus sees his disciples for the first time and eats with them: “Jesus appeared to the Eleven as they were eating” (Mark 16:14), “They gave him a piece of broiled fish, and he took it and ate it in their presence” (Luke 24:41-43), and “On the evening of that first day of the week, when the disciples were together…” (John 20:19)

These disciples experienced the real presence of the resurrected Christ at meal time on Sunday: “Jesus appeared to the Eleven as they were eating” (Mark 16:14), “Jesus himself stood among them” (Luke 24:36), “Jesus came and stood among them” (John 20:19). 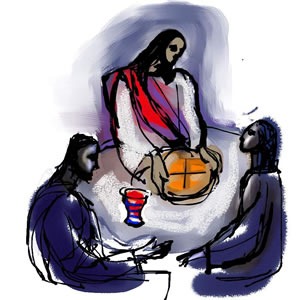 These disciples experienced the realities of the risen Lord at this Sunday evening supper; their eyes were opened and they understood. In Mark’s account, Jesus rebukes his disciples for not believing he’s been raised. But he speaks to them at the meal, he commands and commissions them to preach the good news, and they are empowered to preach “everywhere.” Luke tells us that the disciples look at the wounds in Jesus’ hands and feet during this dinner, they touch the Lord and eat with him, and they confirm that he is indeed not a spirit or a ghost. “Then he opened their minds so they could understand…” (Luke 24:45). Jesus teaches them at the table, commands and commissions them, empowers and reassures them. In the fourth Gospel, after seeing his hands and his side, the disciples “were overjoyed when they saw the Lord” (John 20:20). A very similar Resurrection Day meal experience occurred with the two disciples on the road to Emmaus (Luke24:13-35).

Remember, too, that Thomas was not there for that first post-resurrection meal with the Lord. He missed small groups that night. But he heard about what had happened (John 20:24) and made sure he was present for that next Sunday night (John 20:26). Thomas was there early for that next Sunday gathering. The Cowboys were down by four with six minutes to play, but Thomas still got there early. He pulled up to the driveway at 5:45, ready to go. And, sure enough, as the disciples were eating their meal on that second Sunday, the Lord showed up (John 20:26) and revealed himself to Thomas in the same ways he had opened the eyes of the other disciples the Sunday night before.

So, my question is this: What do you think happened on that third Sunday?

Again, there’s no right or wrong answer. There’s nothing in the Scriptures to tell us what happened on that next Sunday night. But my assumption is that the disciples got together for a meal, expecting to see Jesus. Again. Expecting to eat with Jesus. Again. Anticipating another wonderful dinner with their risen Lord with all the food and drink, fellowship and communion, teachings and commissionings that go with it. And it only makes sense that these dinners would continue every Sunday night with the hope of seeing the Christ. It makes sense that, early on, most disciples had heard the amazing stories about that Resurrection Day meals; they each knew somebody or knew of somebody who had eaten with Jesus on a Sunday after his resurrection. So those Sunday dinners became a very natural way to remember the Lord, to anticipate the Lord’s coming, to celebrate the resurrection of Jesus.

If this is true — nobody has been able to convince me otherwise; in fact, nobody’s even tried — this makes the Lord’s Supper of the early Church a resurrection meal, not a funeral meal. It’s a meal that remembers his resurrection, not his death. It’s a meal that celebrates eternal life, not one that memorializes a temporary demise. Most scholars agree:

“It appears likely that the idea of the Resurrection of Christ was associated, in the minds of the disciples, with the recollection of one or more meals taken with their Master during the period from Easter to Pentecost. And when later these same disciples met to eat together, the recollection of the other meals during which the Risen One appeared to them for the first time must naturally have been very vivid to them. We can now understand why the Christian community in the Apostolic Age celebrated its meals ‘with joy.’ The certainty of the resurrection was the essential religious motive of the primitive Lord’s Supper.” ~Oscar Cullmann, Essays on the Lord’s Supper, 1958.

“The first day of the week, as resurrection day and as the day that Jesus ate with his disciples, became designated as the day when disciples would gather weekly to break bread together.” ~John Mark Hicks, Come to the Table, 2002.

“By eating and drinking with the disciples between Easter and the Ascension, Jesus demonstrates at least three things: he has been raised bodily; he resumes full communion with people who have forsaken him and despaired of the salvation they hoped he would bring; and he equips them to be trustworthy witnesses to his resurrection and to new life, to the life that he has brought to sinners such as they are.” ~Markus Barth, Rediscovering the Lord’s Supper, 1988.

“The promise of Luke 22:16, 18 is fulfilled: Jesus is risen; he is alive and now abides with his people. Therefore, we come to the table in joy, because Jesus is risen. Nowhere is this joy celebrated more appropriately than when believers have fellowship at a meal. Throughout Luke and Acts, meals function as an expression of the joy of the Kingdom of God, where the Lordship of Jesus shines forth in clarity.” ~Allan McNicol, Preparing for the Lord’s Supper, 2007.

Now, how do we better practice this?