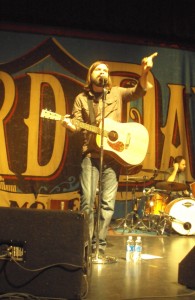 Let me be perfectly clear: I absolutely did not push a little girl out of the way to catch a guitar pick tossed into the crowd by Third Day lead singer Mac Powell during Friday’s show at Amarillo High School. I don’t care what Powell said or what I heard at church here yesterday, it didn’t happen.

Through a bizarre set of circumstances and timing, yes, Carrie-Anne and I wound up on the second row, at dead-middle-center-stage, for the Third Day concert at the high school auditorium. I have no idea why Third Day was playing in Amarillo, much less in the 700-seat high school auditorium. But I decided to take Carrie-Anne. She loves Third Day. We’ve seen them once or twice when they’ve played  at the Ballpark before a Rangers game a few years ago. I’ve always been an Audio Adrenaline guy, myself. But she loves Third Day and, unbelievably, here they were playing a block and a half from our house. I don’t have the time or the space to explain how we wound up in those super-up-close seats. But, we were less than six feet from the edge of the stage.

About halfway through the show — they had already tossed a couple of picks into the crowd — Powell began telling a story about a concert in Missouri in which, after the show, some folks in the crowd actually returned the picks they had caught. He explained that if you catch a pick, it’s yours to keep, and then tossed one, I thought, right at me. I stood up to catch it but it fluttered. Picture the dotted-line flight of Snoopy’s pal, Woodstock, in the old Charlie Brown cartoons. It flipped and fluttered right through my hands and then I lost it. While I was fumbling for it just as awkwardly as you could possibly imagine, Carrie-Anne trapped it on the back of her seat. As she attempted to pick it up, Powell stepped forward and asked, “Did she get it?” 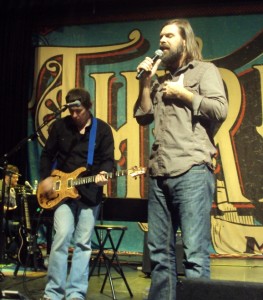 For a split-second I thought he was talking about Carrie-Anne. (Yeah, she got it!) But then Powell continued, “No, the little girl. Did the little girl get it?” There was a little eight-year-old girl sitting right behind us. A cute little blondie, one snaggle tooth in the front, pony tail. Powell leaned in to his microphone, “I meant for it to go to that girl.” By this time Carrie-Anne was holding the coveted pick. And then, almost in slow motion, she realized it was not intended for her. And everybody was looking. Carrie-Anne held the pick high over her head, closed her eyes, stuck her bottom lip way out in the most exaggerated pout in the history of women getting their way by pouting, and passed it backwards to the little girl. With her lip still out, my wife of 23 years looked right at Powell with now wide-open and pleading eyes. And he surrendered. He rushed forward to give Carrie-Anne his only remaining pick. But so did lead guitarist Mark Lee. They both stepped forward with picks for Carrie-Anne and actually jostled one another for position to get to her first. It was funny. And a little weird. Powell finally out-reached Lee and grabbed Carrie-Anne’s hand. He pulled her almost on to the stage as he handed her another pick.

It was sort of awkward the way they both tried to reach Carrie-Anne before the other. And so they discussed it. “Why were you trying to give her your pick?” “Well, I thought you only had one left and I didn’t want you to give away your last one.” “Well, no, I thought since she thought she had gotten a pick from me, then I should be the one to give her another pick, not you.” “Well, it’s okay if I give her a pick.” “Yeah, but it should have come from me.”

Then Powell looked at me and began talking to the crowd. “This guy here, I guess you’re her husband?” I nodded, beginning to be a little uncomfortable with where this might be heading. (On our second date ever, back in college, Carrie-Anne and I became the subjects of a stand-up comedian’s spontaneous song. He made fun of Carrie-Anne’s name and my summer tan. He sang, “Carrie-Anne, Carrie-Anne, lives in a garbage can, dates the garbage man with the garbage tan.” We heard about it from friends at school for the rest of the year. When Powell singled me out, I had flashbacks.) Powell continued, “This guy here, her husband, he’s pushing that little girl out of the way, holding her off, while his wife gets the pick. It’s brutal, man. Wow. You guys are tough in Texas.”

Great. I knew then I was in trouble. We had already seen Steve and Debra Cearley and Mike and Becky Robertson in the audience. Who knew how many other of our Central friends were in the auditorium? (I found out yesterday. A few more.) 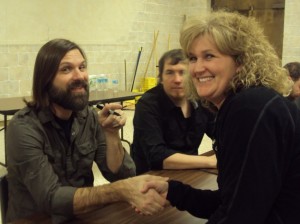 After the concert, we got to meet Powell and the rest of the band for a couple of minutes. Mac agreed to take a picture with Carrie-Anne and the pick. And we shared a couple of jokes. It was a good night. They put on a good show. For the record, though, I did not push the little girl. I didn’t even know there was a little girl anywhere near us until Powell pointed it out. So, whatever you happen to hear in the coming days, I didn’t do it.

Now, if it had been Van Halen… 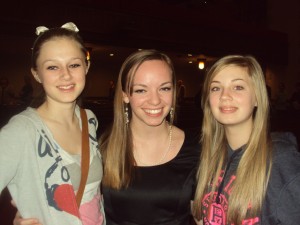 We were so blessed two weeks ago to host the Lubbock Christian University Praise Choir and Chamber Singers here at Central. And my family and I were quadruply blessed to notice that Jalayna Ward was standing on the front row center of the stage for the performance. Jalayna is the middle child of the amazing Ward sisters, that talented trio of daughters belonging to my great friend and co-worker in the Lord, Kipi Ward. What a joy to listen to Jalayna sing again. She tore the house down during our Vacation Bible School musicals back at Legacy and she still inspires everyone who hears her beautiful voice. When Jalayna stepped forward to sing a solo during “All That Have Breath Praise Ye the Lord,” I was taken right back to the stage in that Legacy gym where Jalayna and Ashley Stein blew everybody away. It was so much fun to get caught up with Jalayna after the show, to see her engagement ring and hear about her upcoming wedding, and to get the latest info on Kipi and Hailey and Brooklyn. I remember telling Jalayna more than five years ago in that gym that our God is the one who gave her that beautiful voice and that she would always glorify him by using it for his purposes. She remembered it, too. Or, at least she claimed to. Thank you, God, for our friendship with the Wards and for the ways you provide for and bless that sweet family.