A Spirit of Unity

“Accept one another, then, just as Christ accepted you, in order to bring praise to God.” ~Romans 15:7 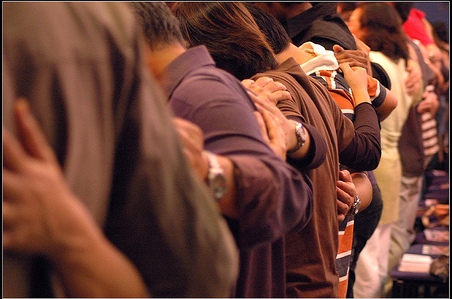 Romans 14 gives us the background for the above exhortation from the apostle Paul. There are two groups of Christians in this church in Rome. Weak and strong. Paul’s words. The weak believers are vegetarians. The strong believers enjoy a good steak. The weak brothers keep all the Jewish holy days. The strong brothers don’t. The weak Christians are developing all kinds of elaborate worship and lifestyle theologies and drawing lines in the sand over what’s right and what’s wrong. The strong Christians don’t have very many lines and they’re not as concerned about which worship and lifestyle practices are right or wrong. The weak are criticizing the strong for being spiritually insensitive. The strong are looking down on the weak for being spiritually immature and inferior. The strong proclaim freedom in Christ. The weak say that doesn’t mean anything goes. The weak tell the strong, “You’re wrong.” The strong tell the weak, “Grow up.”

Are you a weak Christian or a strong Christian? Again, these are Paul’s words. Is your faith weak or is it strong? According to what Paul’s talking about in Romans 14, which are you? Are you the one who worries and frets and draws lines in the sand and develops intricate tests of fellowship for other Christians? Or are you the one who has a total grasp on our salvation in Christ and understands that the things we argue about and worry about don’t really matter at all? Are you the weak brother or sister? Or the strong?

Romans 14:1-4 > Nobody looks down on anybody. Nobody condemns anybody. For God has accepted him. Accepted whom? Who has God accepted? The brother or sister or groups of brothers and sisters who disagree with me on this church tradition or who don’t see eye to eye with me on this disputable matter, this matter of opinion that should not in any way divide the Lord’s Body. You’re not his master. Christ Jesus as Lord is his master. Not you. Whether he stands or falls is up to our Lord. Whether he’s right or wrong is up to our Lord. And Paul goes ahead and makes the call. He’ll stand! Whether he agrees with you or not. Whether y’all are on the same page or not. He’ll stand because he’s in Christ. So, you accept him because Jesus accepts him. Christ died for him, Paul says. What are you doing?

Romans 14:5-8 > Each of us should be fully convinced in our minds that what we’re doing is the right thing to do in the eyes of our God, but don’t bind that on another brother who doesn’t feel that way. If he practices something different, we assume we’re both doing it to the Lord, before the Lord, in the presence of the Lord with a clear conscience. We assume that my sister with a different belief or a different practice is not believing flippantly or practicing casually. She’s doing it with careful study and reflection and prayer and conviction. She’s fully convinced in her mind that she’s doing the right thing. So everything’s OK.

Paul is calling for unity in Spirit here. Not unity in opinion, not unity in practice, not even unity in belief. And he’s dealing with what at this time in the Church were huge issues. Unity comes with where your heart is. What’s your motivation? What drives you? Who are you thinking about?

Paul clearly identifies himself as one of the strong. But it’s interesting to me that he doesn’t say the weak need to change their minds or their opinions or their practices. In fact, he goes so far as to command them not to change their practices unless their minds are fully convinced. Paul’s prayer is not that all the Christians in Rome come to the same opinions on these things. No. He’s praying that they may possess a spirit of unity that transcends the differences.

“May the God who gives endurance and encouragement give you a spirit of unity among yourselves as you follow Christ Jesus, so that with one heart and mouth you may glorify the God and Father of our Lord Jesus Christ.” ~Romans 15:5-6