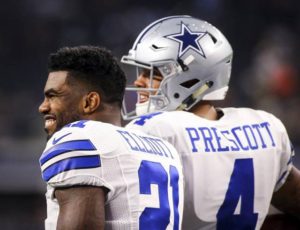 Since the day Jerry Wayne’s gargantuan ego caused him to fire his back-to-back Super Bowl winning coach and replace him with Barry Switzer, I’ve lived by the mantra, “If you can’t say anything ugly about the Cowboys, don’t say anything at all.”

Allow me to break from this blog’s tradition for just one day and, in the words of that fired coach, say, “How ’bout them Cowboys?!”

I don’t get it. I thought God hated the Cowboys what with the devil himself owning the team. I’m still expecting some awful and delicious thing to go horribly wrong in a way that rips the gut out of this team and its fans like never before. Surely some incredibly unforeseen tragedy awaits.

Or, maybe not. This team has been gifted with two unbelievably talented and unflappable rookies in two really critical roles and this train is not just rolling, it’s gaining speed with every week.

Look at Dak. He’s really only had two rough quarters this entire season. Against Philadelphia, the Eagles blitzed him and hit him and knocked him down and sacked him more than he’d been harassed all year. And for the second and third quarters, he looked a little overwhelmed. A little. But then he figured it out and he’s been super hot ever since. In his first two or three games I had two criticisms of his passing: he threw behind his receivers and he never went deep. Well, you can fix throwing behind receivers — that’s a timing thing — and he’s done that. Throwing deep? Yeah, he’s doing that, too, with a super soft touch that receivers absolutely love. Reading blitzes? Seeing the field? Scrambling to throw? Prescott’s got all of it. And he’s gained the respect and confidence of everybody in that Cowboys locker room.

Look at Elliott. Yesterday Troy Aikman compared him to Emmitt Smith in the way he makes that first tackler miss. Troy would know. And he’s not given to much hyperbole. I trust that. The part of Elliott’s game that reminds me of Emmitt is the way he uses his hands while he’s running to knock away the arms and hands of those would-be tacklers. Have you noticed that? He instinctively slaps their hands away just like Smith; it’s beautiful. He sees the field, he waits on his blocks, he picks up blitzing linebackers, he catches the ball out of the backfield, and he’s got a turbo-charged next gear that takes your breath away. I’m not a fan of his halter tops, but Zeke looks like a great running back.

The whole rest of the team, and maybe the entire franchise, is feeding off the success of these two surprising rookies. The defense is playing with more confidence and energy. The special teams are making spectacular plays every week. Jason Garrett’s game management and play calling seem to be less conservative; he seems to have more confidence in Prescott than he ever had in Romo.

Now, honestly, I’ve tried to make excuses all along during this incredible start. The Cowboys are playing a last place schedule, the easiest slate of games in the league. But I can’t get away from the fact that it’s very hard to get wins in the NFL. Even against bad teams, it’s tough to win. But the Cowboys are beating the good teams — a November win in Pittsburgh is massive any year — and making the bad teams look like the JV. In a league that is structured to produce 8-8 teams, the Cowboys have won eight in a row.

Yes, they’re on a roll. Yeah, they’re fun to watch. And… wait for it… I’ve read more than a couple of national and regional writers today who are using the words “Cowboys” and “Super Bowl” in the same sentence.

I’ve watched almost every snap of almost every Cowboys game since the day Jerry Wayne fired Johnson and took over full control of the franchise. We’ve all been conditioned to expect something unexpected, something horribly unexplainable, to go foul at the absolute worst time and rip the guts out of this team and its fans. A season-ending injury. A bone-headed coach’s decision. A bye-week arrest. Five turnovers in a division home game. A botched snap on a game-winning field goal. A video-reversed referee’s call on a diving catch. Something. Most fans push those dark dreads aside, ignoring the inevitable, foaming at the mouth, getting Super Bowl tattoos before Black Friday.

That makes it all the more delicious when the whole thing comes crashing down. The shock. The horror. The wailing and gnashing of teeth.

Me? I’m expecting it. This team hasn’t won a single divisional playoff game in more than 20 years. Are two rookies going to change that? I don’t believe so, not yet.

But, man, they are seriously on a roll right now.