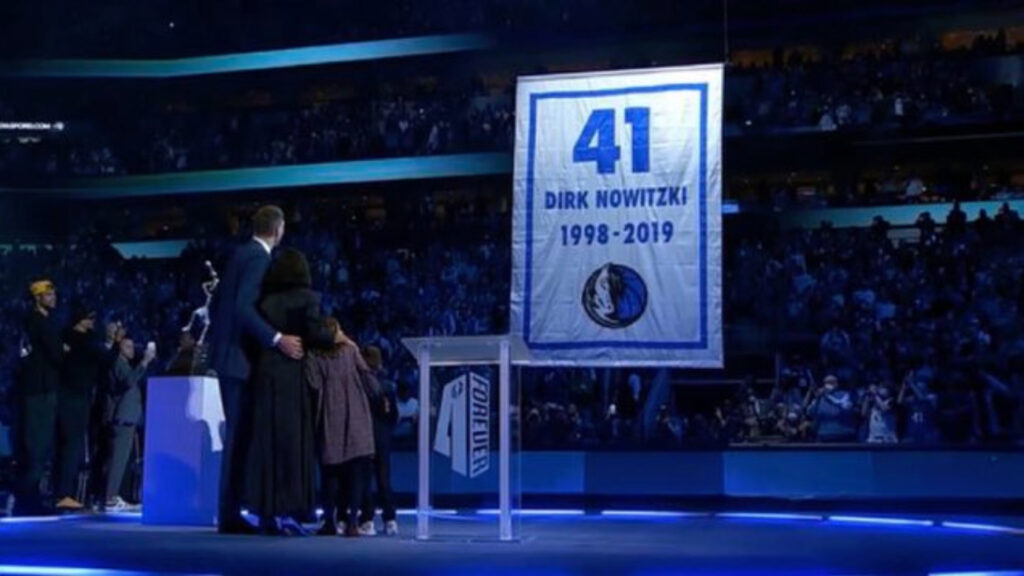 Forty-One is a prime number. Fitting that it should belong to, and forever identify such a prime dude.

Dirk Nowitzki’s number was hoisted to the rafters at AAC last night in a post-game ceremony that featured NBA Commissioner Adam Silver, members of the Mavericks 2011 NBA Championship team, an offer of a ten-day contract by former teammate and current Mavs coach Jason Kidd, and the unveiling of a statue honoring Dirk that will be constructed in front of the home arena later this year.

Dirk’s accomplishments are well chronicled and undeniably great. He spent his entire 21-year NBA career in Dallas, the only player in league history to play so long for the same team. During his legendary run, Dirk racked up 14 All Star game appearances and 12 All NBA selections. He was the league MVP in 2007 and the Finals MVP in 2011 when he brought the Mavericks their first and, so far, only championship. When he retired two years ago, he did so as the sixth leading scorer in NBA history with 31,560 points, and the Mavs franchise leader in seasons played, games played, games started, points scored, rebounds grabbed, shots blocked, field goals made, free throws nailed, three-pointers swished, and one-legged fadeaway jumpers.

And he absolutely owns the city of Dallas.

And he has my undying admiration and gratitude.

I was fortunate enough to cover Dirk and the Mavericks up close during my time at KRLD radio in Dallas. For almost five years I attended at least one or two practices a week, sat courtside at most home games, and waited in that Mavs dressing room each night for an eternity waiting on Dirk to finish his post-game shooting in the practice gym and his shower so we could interview him about his and the team’s performance.

I remember those long waits. It didn’t matter if he had played terrible in a tough loss or if he had shot 90% in an important win, he spent that 45-minutes in the practice gym after every game. And we all waited on him. We had to. You don’t leave a Mavs game without getting sound from Dirk.

I remember holding my microphone with the KRLD logo up high with my right arm during those late night media scrums around his locker. You don’t realize how tall a seven-footer really is until you’re holding a microphone up to his face for twenty minutes. I remember how uncomfortable it was. Switching arms. Supporting my right arm with my left hand in a subtle way I hoped nobody would notice.

And I remember how amazingly kind and accommodating he was for all those years. Last night he actually thanked the media for treating him fairly – you don’t hear too many professional athletes say that, if any. He never skipped those post-game talks. He always showed up and he always answered every single question with dignity and class. And patience. I never saw him get upset with a reporter. Ever. I don’t think I can say that about any athlete I covered. Even as laid back and cool as Steve Nash is, he would let fly with the sarcasm and a dismissive eye-roll when he was irritated. Not Dirk. Not ever.

I especially remember one late night after a tough loss when Dirk did something special for me. It was during the ’04-’05 season. The Dallas Observer had somehow talked Dirk into writing a weekly advice column, a tongue-in-cheek, comical outlet for Dirk and a promotional novelty for the downtown paper. The column was funny and well-received. Everybody was having fun with it. And, of course, I wanted to cash in for my own selfish purposes.

My producer, Eric Gray, and I asked Dirk if he would do a bit with us in which he gave us couples advice. We would come to him with our relationship issues, problems that could only happen between a talk show host and a producer, and he would give us his advice for mending the fences and learning to live and work together in harmony. We wanted it to be funny. We would come up with the hilarious problems and he would deliver his comical advice. Dirk was okay with the idea – he wasn’t as in love with it as we were – and agreed to do it after the last game of the current homestand.

That night came and the Mavs lost. I can’t remember now who beat them, but it was not a pretty night. It was quiet in the dressing room that night. There was frustration in the air, maybe even some tension. We waited and waited like always for Dirk to come out and, when he did, he answered everybody’s questions professionally and honestly. Like always. About five minutes into it, he sat down at his locker. He continued to answer questions, but he was sitting down, which was unusual. He was worn out. I could see it in his eyes and hear it in his voice, see it in his body language. He was not in a good mood. And Eric and I were hoping to do this funny bit.

We waited for Sefko and Duane and Stein and the other beat writers to finish and then Dirk looked right at me. He knew what he had agreed to do and when he told me he would do it. But I didn’t have the heart. So I gave him the out. “Dirk, you don’t have to do this. We can do it when y’all get back.”

I was surprised. And pleased. But not really sure about it. As we set up our recorder and microphones, I wondered to myself if it would it be better to wait a week or so when he’s in a better mood or get it now and risk it not being as funny? What to do?

But Dirk turned it on. He delivered. As always. He found the energy and gave us the funny lines and completely killed it for almost nine minutes. 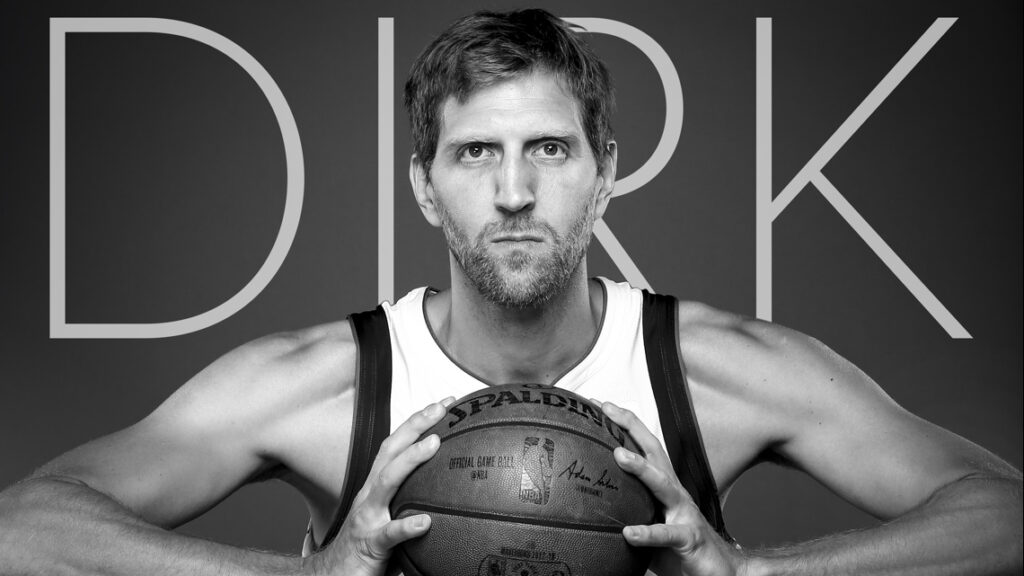 I love Dirk Nowitzki for playing in Dallas for his entire 21-year Hall of Fame career. I love Dirk for embracing my hometown and bringing my city a championship, for struggling so long to climb the hill and to finally conquer it with hard work and leadership and commitment. So many guys take the easy way out. Dirk never did. There is something very noble in staying where you’ve been placed and doing everything in your power to win right there, with whatever cards you’re dealt. It’s honorable. David Robinson and Tim Duncan did it in San Antonio. Reggie Miller did it in Indiana. And Dirk did it in Big D. It’s rare. And it’s beautiful.

But I admire Dirk and I’m thankful to him for that night at his locker when he gave me those nine minutes after a tough loss. It’s just one small example of the hundreds of things that point to his character and his class.

Forty-One is a prime number. And now it’s in a prime position in the rafters at AAC. Forever.