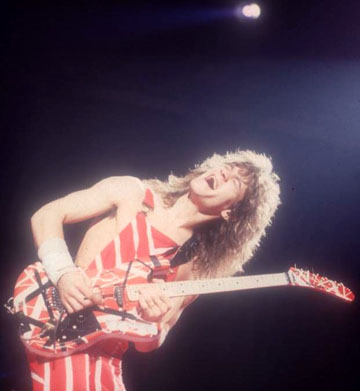 There was an almost 30 year period, from the late 1970s through the early 2000s, when every band in America had a guitar player who thought he was Eddie Van Halen. Of course, there is only one Eddie Van Halen. And his passing yesterday after a long battle with throat cancer caught me off guard, brought to mind many memories and to my heart many wistful waves of nostalgia, and afforded a wonderful opportunity to connect with lots of great old friends.

The first text came from the Drake — love the Drake — at just after 2:30 yesterday afternoon. “Pour one out for Eddie Van Halen, dead at 65.” After we exchanged a few messages regarding the details and once I confirmed the awful news with a quick search of the internet, the first phone call I made was to our youngest daughter, Carley. It went straight to voice mail.

She immediately texted me two words: “I heard.”

She knew. She knew exactly why I was calling. Her follow up text informed me that she was in class and would call me soon. 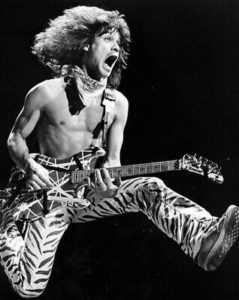 My next call was to Todd Adkins. Todd was my best friend in high school and we were roommates during our Freshman years at OC. I think it was the summer between our Freshman and Sophomore years in high school when Todd’s aunt made him a cassette tape copy of Van Halen’s phenomenal debut album. She recorded it from her LP to the cassette, wrote “Van Halen” on it with a black ballpoint pen, and gave it to Todd. And we absolutely wore that tape out. My October birthday meant I got my drivers license before anybody else in our class and we played that tape on a continuous loop in my 1974 Monte Carlo. One night, very soon after I began driving, I spent the night at Todd’s house on Telegraph Lane off I-30 and St. Francis. We spent most of the whole night terrorizing his neighborhood, doing things we should not have been doing, with the windows rolled down and that Van Halen tape blaring .

The very first time I ever heard “Eruption,” Eddie’s screaming guitar solo that leads into their blistering cover of “You Really Got Me,” was spinning that tape that belonged to Todd. “Eruption” is one-hundred-seconds of pure jaw-dropping, face-melting, guitar genius. I’m not sure I had ever heard anything like it. And I was hooked. Todd and I rolled that tape way too loud on an oversized boombox during late night basketball games in Glen and Becky’s backyard. We listened to it before football games and while we were washing our cars, to and from concerts and on long road trips. We took it to college, pulled our stereo speakers out into the courtyard, and blasted that tape across the tennis courts, up to the student center, and through the lobby in the girls dorms. When I hear any cut off that incredible album, I think about Todd.

Todd and I only talk every two or three years or so. When he saw my name flash on his phone, he just knew someone had died. He was not relieved to learn that it was Eddie Van Halen. We talked together about our wives and our parents, our younger sisters and our kids. And we remembered the Texxas Jams and the late night basketball and the cruising and screaming along with Diamond Dave as Eddie’s guitar deliriously pierced our brains and infected our souls.

As I started my truck to head home last night, “Atomic Punk” was playing on the stereo. “Nobody rules these streets at night but me, the Atomic Punk!” Yeah, I had already been listening to that first Van Halen album all day. I plugged it in on my way to work yesterday morning, the day Eddie Van Halen died. I listened to it to and from lunch that afternoon, and it was in the player when I started for home. It’s not a total coincidence. There’s always about a 70-percent chance I’m listening to something by Van Halen.

When I got home, I immediately pulled out all six of my original Van Halen LPs and went through the liner notes. I reviewed the ticket stubs from the six times I saw Van Halen in concert. I remembered that my first Van Halen show was the 1986 Texxas Jam, and I had won the tickets off the radio. I noticed that my ticket from the 1990 concert at Reunion Arena was $12.50, the 1992 show at the Erwin Center in Austin was $22.50, and the last time I saw Van Halen, with Carrie-Anne on the floor at American Airlines Center in 2004, the tickets were $97.50. Worth every last penny every single time. 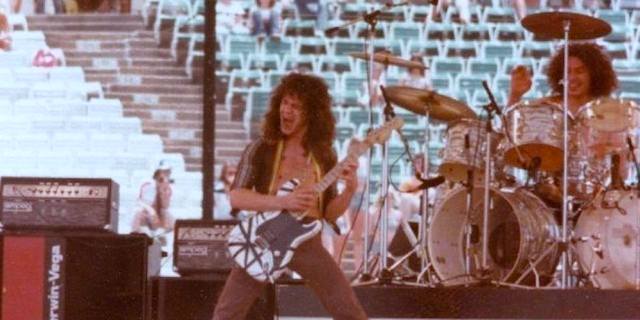 There were also the concerts that didn’t happen. We were at the 1988 Texxas Jam with Van Halen headlining when, two songs into their set, Sammy Hagar’s voice completely gave out. They were doing “Ain’t Talkin’ ‘Bout Love” and he couldn’t get through the first chorus. Sammy stepped off the stage while Eddie, Alex, and Michael finished the song. Then those three did a wild cover of Led Zeppelin’s “Rock and Roll” with Michael Anthony taking the lead on vocals. Then Sammy came out and announced they couldn’t continue that night, but they would make it up to us and do a free concert in Dallas at a later date. That fall of 1988, we all had tickets to Van Halen’s Oklahoma City concert at the Myriad Gardens; then we all got refunds when the band cancelled. Three years later, on a late November afternoon in 1991, Dallas radio stations announced that Van Halen was playing that free concert in the West End. That night. We were in Marble Falls by that time and I was broadcasting a high school football playoff game that evening. I couldn’t have made the four-hour drive in time anyway.

Speaking of Sammy Hagar, I am not a Van Halen fan who lives and dies in the David Lee Roth versus Sammy Hagar wars. So many fans of the music are in the “either/or” category – you have to love one and hate the other, you have to choose – and I’ve never been that way. I truly believe you can put 5150 and OU812 up against Van Halen’s first album and 1984 and they’re all so solid. They all stand up, side by side, because the driving force behind all of it is Eddie. It’s his band. It’s his songwriting. It’s his passion. It’s always been about Eddie for me. 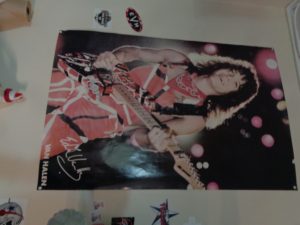 The Eddie Van Halen poster I had on the wall in my room as a teenager growing up in Dallas? The one I took with me to college and hung in my dorm and my apartment? I’ve still got it. It’s hanging up in my garage today. It’s always been about Eddie.

Two Sundays ago, Carrie-Anne and I were driving home from church, listening to Van Halen’s “Right Now.” I said, “Do you remember when they played this song in Dallas? Remember the video clips they were playing and all those funny slogans they were showing during this song? Remember when Eddie played this solo?” She replied, “All I remember is that when he played his solos, he played too long.” She doesn’t get it. I love her dearly. But she doesn’t understand.

Eddie always did something with the guitar you had never seen or heard before. Every time. Even two hours into the sixth time I had seen him live, I was still surprised. Still overjoyed and almost overcome. His fingers moved so fast and he used every square centimeter of the guitar, from top to bottom. His sound is uniquely his – you know it’s Eddie by the second note. That guitar solo in the middle of Michael Jackson’s “Beat It?” You know why it sounds just like Eddie Van Halen? Because it is. Only he can do that. And he always had so much fun. He was always smiling, laughing, while he played. He made it look so easy and so fun – the way he interacted with his band mates and with the crowd, the way it seemed so effortless. Of the tributes you’re seeing on the news, of the video clips, he’s smiling in all of them. He loved what he was doing and you loved being in his presence while he was doing it.

I heard from David Byrnes yesterday and the conversation quickly turned to how old we are. Darrin Carpenter checked in with me and we discussed 5150 — he had been listening to it that morning, just like I had been listening to Van Halen I. I texted Mike Osburn and we acknowledged the sadness we both were feeling and the gratitude for the chance to re-connect with old friends. Carley called me back and I vowed to get her to an Aerosmith show before Steven Tyler dies. She made it to Tom Petty with me in 2016, but I never got her to a Van Halen concert. I always thought we would have time. I just assumed Eddie Van Halen would always be playing guitar somewhere. Valerie checked in with me. She knew it was tough news for me. My brother-in-law, who teaches at a Christian high school in Edmond, Oklahoma texted me this morning to let me know he was beginning every single class period today with “Eruption” in honor of the greatest guitar player in history. He’s got a surround-sound system in his classroom; I’ll bet it’s awesome. Even as I’m typing this post, I can hear Van Halen coming from Elaine’s computer in the office next door. She’s remembering, too.

Here’s “Eruption.” Let’s all listen to it one more time.