Three elders and a preacher are headed down to Houston right now in a huge truck loaded with 130 cases of bottled water, 150 buckets of cleaning supplies, two jugs of hand sanitizer, and a case of granola bars. 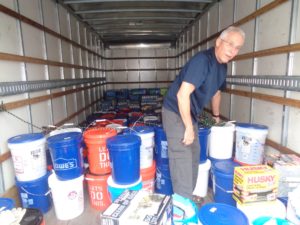 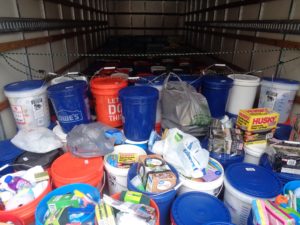 We took the truck to Zach’s Club early this morning and loaded up 90 cases of water they had been collecting, grabbed another 40 or so from Brown Automotive, then headed to Central to pack the Harvey buckets our church has been collecting since Sunday. 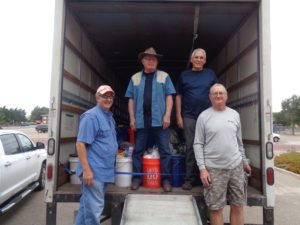 Bruce, Tom, John, and Carroll left here at just after 9:00 this morning to deliver the relief supplies to Doug Peters and the Grace Crossing Community Church of Christ down in Conroe. Doug tells me they’re handing out around 400 buckets and going through about five hundred bottles of water per day. Some of the supplies are being used to benefit Grace Crossing members and folks in that church’s immediate neighborhood. Some of it’s going to the Impact Church in downtown Houston to assist the families associated with the outreach programs through that congregation. And a lot of it is being spread all over the greater Houston area to help those who’ve been displaced by Hurricane Harvey.

We’re going to keep collecting the buckets here at Central through Sunday September 24 and make at least one more trip down to Conroe. Spread the word!