What If It Happened Here? 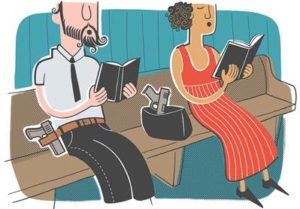 The headline on the front page of today’s Amarillo Globe-News asks the question in bold print: “What if it happened here?” with the subheading: “Local churches eye security measures in wake of massacre.”

The paper quotes a couple of local pastors who are considering changes to their church’s security plans in light of last Sunday’s horrible shooting at First Baptist Church in Sutherland Springs. One of the pastors is hiring an armed Amarillo Police Department officer to be present during their worship services, claiming it will put the members of his church “at ease to see a uniformed officer” and that he wants his people to “feel safe and secure.” This pastor is also considering hosting an active shooter seminar for his congregation. Another pastor expresses the need for an active shooter seminar at his church “as soon as possible.” All of the pastors in the story have some type of armed security personnel in and around their buildings during services. We do, too, here at Central.

The headline asks a question the story never answers: What if it happened here? Maybe the reporter never asked the question and the headline writer was having a rough night. It’s a good question. What happens in your church building if — God forbid — an active shooter begins opening fire? What happens at Central?

If the Church of Jesus is established by God to serve as a light to the world, as an alternative community in contrast to the values and priorities of society, as a scandalous counter to the ways and means of our culture, then we would all keep our guns in our holsters. If God’s Church is established to witness to the “other” way, to proclaim and live out the teachings of Jesus, the true interpreter of God’s Law, then the shooter would not be shot — at least not by a Christian.

What if it happened here?

Nearly two years ago The Christian Chronicle published a front page story about church shootings, quoting a dozen ministers from a dozen different congregations in several states who believe and, apparently, teach that carrying a gun and being prepared to use it against another human being is a good thing to do.

Those preachers were asked the question, “What if it happened here?” A minister in Florida said, “walking in with the intent to harm our congregation would be like walking in to harm someone at an NRA rally or gun show.” A minister of another church told the Chronicle that lots of people in his congregation are packing and “someone would be sorry to try anything here.” Some of the preachers interviewed even attempted to say that shooting a criminal inside the church building is the “Christian” thing to do. One preacher from Houston said, “There is a world of difference in being ready to die for your faith than to die at the hands of a crazy man simply because he’s crazy. I believe God would permit me to protect myself and my family in cases such as that.”

One, you cannot use the name of our Lord to justify the killing of anyone under any circumstances. Ever. Yes, Jesus moves to protect those under attack, not by killing the attacker but by stepping in front of the bullet. And he would forgive the attacker and pray for him while he was dying. I’m always surprised to hear Christians say, “Jesus would not allow himself to be a victim.” Actually, our Lord willingly left his home in glory, put all of his trust in the One who judges justly, and purposefully submitted to being the worst kind of victim. He blessed those who attacked him, he loved those who hated him, he forgave those who killed him, and never lifted a finger against any of them in self defense. I’ve heard other Christians acknowledge that truth about our Lord and then add, “Well, Jesus wouldn’t shoot anybody, but I would.” That actually makes you, by definition, not a Christian.

Two, Jesus’ words in Luke 22 do not authorize the use of gun violence in any way. Jesus is telling his disciples that things have changed. The first time they went out, they were all welcomed with goodwill and hospitality. But now, when they are scattered, they are going to face opposition. They’re going to be ridiculed, rejected, and maybe even killed. Now, Jesus says, you’re on your own out there. Don’t count on other people to help you. You’re going to need a purse, a bag, a sword, whatever. He’s speaking figuratively. He doesn’t discount in this moment every word out of his mouth for the past three-plus years against violence. He’s not saying the opposite now of his every teaching against violence. He’s speaking symbolically. How do we know? Because when the disciples reply, “Look, Lord, we’ve got two swords right here,” Jesus rebukes them. “Enough, already! Stop!”

Yes, Jesus says, you’re going to face intense opposition to me and my message, your very lives are going to be endangered. But you don’t respond with self-defense and violence. Enough! You’re missing the point! Jesus will have nothing to do with swords, even for defense. How do we know? Because later in this same chapter, in the very next scene when Jesus is being arrested, one of the disciples asks him, “Lord, should we strike with our swords?” And Jesus says emphatically, “No!”

One of the Christ-followers uses his sword to cut off the ear of the high priest’s slave. And Jesus sharply rebukes him. “No more of this! Stop!” And he heals the injured attacker. He ministers to and heals the one who came to harm him. In Luke 22, literal armed resistance as self-defense is exposed as a foolish misunderstanding of Jesus’ message.

Of all the ministers quoted in the Christian Chronicle article, only one expressed a theological and scriptural objection to the use of gun violence by Christians in self-defense. Tyler Jarvis, the student and family minister for the Oak Ridge Church of Christ in Willow Park, Texas, said, “I think that the church should trust in the protection and mercy of God, even if it means not being able to defend against an attacker or intruder. The church ought to be able to extend love and forgiveness to those who wish them harm, even if it costs them their lives in the process.”

There are many reasons Christians in the U.S. believe it’s OK to kill people in self-defense. Culture plays a role, society has something to do with it, fear informs our understandings, and there appears to be a general unwillingness to carefully think things through and reflect. Gun violence is normalized as if there’s no choice. We accept the culture’s position and then approve it for God’s Church. There’s no theological challenge, just an out-of-context proof text.

Since when is showing unconditional mercy and love and grace and forgiveness in the face of danger and death labeled as cowardly and weak? Since when is praying for our enemies and refusing to repay evil for evil and sacrificing self preservation for the sake of the sinner viewed as unrealistic? Our Lord was not cowardly in the Garden of Gethsemane that night. And he wasn’t weak when he willingly submitted to the cruelty of the cross. Neither are Christians who reject the use of violence to get their way. They are courageous and brave, faithful and true.

Christians, leave your guns at home this Sunday. Practice prayer. Practice forgiveness and mercy. Practice discipleship and obedience to The Way. Pray to God that nobody with violent intent ever attacks your church family in the sanctuary. But also pray to God for the courage and strength, should it ever happen, to respond in ways that will honor our Lord, the Prince of Peace.