In Community with Sinners

“This son of yours who has squandered your property with prostitutes!” ~Luke 15:30 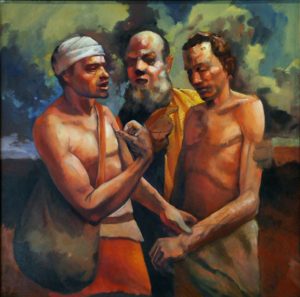 There’s a problem when we don’t see ourselves in community with sinners. We are all sinners. We’re all stained with sin.

In Jesus’ timeless story, the older brother’s sin is not breaking the father’s rules, it’s the pride he has in keeping all the rules. It’s not his wrong-doing, it’s his righteousness — his self-righteousness — that’s separating him from his father. The younger son wanted to make his own decisions, he wanted control of the wealth, so he left. The older son wanted the same control and he tried to get it by staying. “I’ve never disobeyed you,” he says, “Now you have to bless me.”

Both brothers had faulty hearts. They both resented the father’s authority. They both looked for ways to get out from under the father’s rule. They each tried to do things their own way for their own benefit, not matter how it impacted the relationship. But the older son doesn’t see himself as a sinner.

“This son of yours who has squandered your property with prostitutes,” he says. “He may be your son, but he’s not my brother. You can claim him as yours, but I don’t want any part of him. And remember what he’s done! Remember his terrible sins! We’re not just going to ignore his sins, are we?”

You’ll never forgive anybody if you think you’re better than they are. All have sinned and fallen short of God’s glory. How do we forget that? Hanging out with sinners isn’t going to accomplish much, if anything, if you can’t see that all of us are in the same boat.

The good news is that the father’s love and grace covers every single kind of sin. Jesus gives us this story so we can see that God’s love and forgiveness can pardon any and every kind of sin and restore any and every kind of broken relationship. It doesn’t matter who you are or what you’ve done. The father says, “I’m not going to wait until you’ve paid off your debt. I’m not going to wait until you’ve begged. You’re not going to have to earn your way back in to the family. I’m just going to take you back. I will cover your nakedness, your poverty, and your shame with the glorious robes of my love.”

The father pounces on his sinful son before he can clean up his life, before he can prove he has a changed heart, before he can even say his repentance speech. The father is only concerned with getting rid of the sin in order to restore the relationship. And the only way to get rid of sin is to forgive it.

Sin destroys relationship with God. So God took care of it. God made his Son to be sin for us. And our sin died with Christ Jesus on the cross. God is reconciling the whole world to himself in Christ, not counting people’s sins against them. God takes care of the sin. He forgives it.

The Father is waiting for you. He’s looking and searching for you. And he’s waiting, not to condemn you but to welcome you. With a gracious heart, he’s running to you. With compassionate arms, he’s hugging you. With merciful lips, he’s kissing you and speaking to you words of forgiveness and reconciliation.