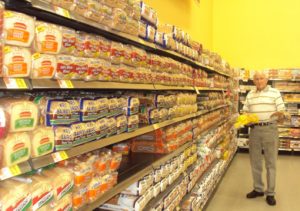 I needed the right guy. I can’t remember now exactly what the sermon was about, but I was using as an illustration the overwhelming number of choices we have to make every day. You don’t just go to the store to pick up some toothpaste, there’s a whole aisle of 37 brands and 193 varieties of toothpaste! You don’t just buy shampoo, there are six long shelves of shampoos from which to choose, an endless myriad of brands and smells and hair types and colors. Sometimes these choices can paralyze us. And I needed somebody to meet me at the Wal-Mart so I could take his picture in the bread aisle, holding up two different loaves of bread, and looking very confused. This person had to be a good actor. He had to have a great personality. He had to appreciate a good gag. This needed to be a guy the whole church knew and loved. And it had to be somebody who was never confused about anything, a decisive guy who knew what he wanted and always got it immediately.

That guy was Vernon Camp. I called. He said “Yes.” And he was perfect.

I told the church I was at the grocery store taking pictures of the shampoo and toothpaste choices and I came across Vernon in the bread aisle. Melba had sent him to the store for a loaf of bread the day before yesterday and he was still there trying to decide which one to buy!

This was just four months into my ministry here at Central. I didn’t realize at the time that Vernon Camp was already pretty famous.

On the day he graduated from high school in 1946, Vernon and a buddy hitchhiked to Ardmore, Oklahoma so they could enlist in the Navy, put in their two years, and go to college on the G.I. Bill. He enrolled at the University of Oklahoma in 1948 and was a walk-on for second-year head football coach Bud Wilkinson — the very beginning for OU’s most glorious days. During those four years, Vernon never played in an actual game, but he suited up in the Sooners’ Crimson and Cream uniforms for every practice and stood at the ready on the sidelines for every contest. During those four years, OU went 39-4, won four conference titles, two Sugar Bowls, and one national championship. That explains pretty well his obsession with everything OU. He hated that I always referred to his alma mater as “Zero-U.” He loved rubbing it in my face every second Sunday in October.

While he was at OU, Vernon was a member of the university’s glee club. They were so good they actually performed on the Ed Sullivan Show in New York City. Vernon was practically as famous as The Beatles and Elvis — they shared the same stage!

We buried Vernon on Tuesday. Ladies and Gentlemen, Vernon has left the building.

There’s a lot to like about Vernon Camp and there’s a ton that we’re going to miss. He helped people. He selflessly served others in the name and manner of our Lord. For more than 20 years he faithfully delivered Meals on Wheels here in Amarillo. He loved to serve and visit. He would say, “This isn’t just the only meal some of these people get every day, it’s the only time they get to talk to somebody.” Every Christmas he bought brand new shoes for all the kids at High Plains Children’s Home, totally under the radar. Thirty-five years ago he co-signed a loan for a set of tires for a guy he barely knew. On his 80th birthday he was pouring concrete for one of his sons. At 87 he was clearing brush and digging up trees for another son and his family. He was always helping people, taking care of people, showing people the love of Christ. He led the family prayer at meal times, insisting that everybody hold hands in a circle.

For 57 years he served as a faithful member of this church family at Central. Serving homemade ice cream. Hosting the Family Life Group. Singing in the choirs. Loving and encouraging the preacher. Greeting visitors. Making the B.K. class so much fun. And being such a dear and great friend to so many. He made so many of us better. He made all of us better. Without Vernon by his side, I’m afraid Bobby Sumrow is going to lose a lot of his charm.

He had that stroke two years ago while they were in Oklahoma. Then the bad fall off the ladder in the garage. The blood clot in his brain that had to be removed. (I showed up in his room right after the surgery wearing a Texas Longhorns shirt. I told him I wanted it to be the first thing he saw when he woke up so he might think he had died and this is what everybody wears in heaven.) Then the Alzheimer’s. And it seems like it happened so fast.

Vernon Camp finished his race early last Thursday morning at 89 years of age. Loved and cherished by God, forgiven by the blood of Christ, overflowing with the Spirit of the Lord.

The past six months or so Vernon was unable to remember our names. And that’s hard. But it’s OK because God remembers. God remembers Vernon and he is faithful. And we remember. We remember Vernon. We’ll never forget the ways his gentleness and grace reflect the glory of our Lord. And we’ll take care of Melba. And we’ll encourage his family by remembering with them how much Vernon touched our lives.

May God bless Vernon Camp and receive him into his faithful arms. And may God bless all of us with the strength and the faith and the confidence that he is able to keep what we’ve entrusted to him until that great day.