The Heart of God

“The time came when the beggar died and the angels carried him to Abraham’s side.” ~Luke 16:22

Helping the hurting in this world gets us very, very close to the heart of our God. Our God personally identifies with the poor and the needy. His heart is with the most powerless and vulnerable people of our society: the widow, the orphan, and the immigrant. God himself is so closely connected to the poor and the hurting, he personally feels it when you ignore them.

“He who oppresses the poor shows contempt for their Maker,
but whoever is kind to the needy honors God.” ~Proverbs 14:31

This is a strong statement here. But it’s still just a metaphor, right? Disliking the poor is not exactly the same as disliking God. It’s still just a figure of speech, right?

In case you wanted to use that weak loophole as a way to avoid helping the poor, God himself came to this earth to show us how much he identifies with the helpless. Jesus was born in a livestock trough to poor peasant parents. Jesus lived with the poor and the marginalized. The poor and the hurting were drawn to him.

“Foxes have holes and birds of the air have nests, but the Son of Man has no place to lay his head.” ~Luke 9:58

He rode into Jerusalem on a borrowed donkey, he spent his last night with his followers in a borrowed room, and when he was killed they laid him in a borrowed tomb. Apparently, his only possession was a single robe. He didn’t have anything the world valued. And what little he had, was taken away. He was unfairly accused and unjustly tried, beaten on the stand and cruelly tortured, executed with extreme prejudice.

Our God knows. He knows. He identifies with all the nameless and powerless and invisible poor and hurting people in our world. He lived it. This is the very core of who God is and what he’s all about.

He sees Lazarus. God protects Lazarus and provides for him. God loves Lazarus and cares deeply about his situation. And he’s going to fix it. God is a God of justice and he’s making all things right. God is reversing the tip of the scales and he’s bringing his perfect and righteous justice to all people who are injured and abused and ignored by the structures and systems of a fallen world.

God also sees the rich guy and the way he neglects Lazarus. God is aware of all of it. And he’s going to make things right.

She is worth far more than rubies.
Her husband has full confidence in her and lacks nothing of value.
She brings him good, not harm, all the days of her life.
She selects wool and flax, pizza dough and hamburger meat, and works with eager hands.
She provides food for her family and portions for her girls.
She sets about her work vigorously; her arms are strong for her tasks.
She opens her arms to the poor and extends her hands to the needy.
When it snows, she has no fear for her household; for all of them are clothed in long johns and thermal socks.
She makes coverings for her bed; she is clothed in blue jeans and her “In Dust We Trust” sweatshirt.
She is clothed with strength and dignity; she can laugh at the days to come.
She speaks with wisdom, and faithful instruction is on her tongue, regardless of whether the kids at Tascosa are paying attention or not.
She watches over the affairs of her household and does not eat the bread of idleness; unless it’s Little Caesar’s Crazy Bread, she could sit there and eat that for days.
Her children arise at nearly noon on Saturdays and call her blessed; her husband also, but much earlier, and he praises her:
“Many women do noble things, but you, Carrie-Anne, surpass them all.”
Charm is deceptive and beauty is fleeting; but a woman who fears the Lord is to be praised.
Give her the reward she has earned (a 90-minute deep tissue massage at Bella Luna) and let her works bring her praise.

Happy Birthday, Carrie-Anne. I love you. 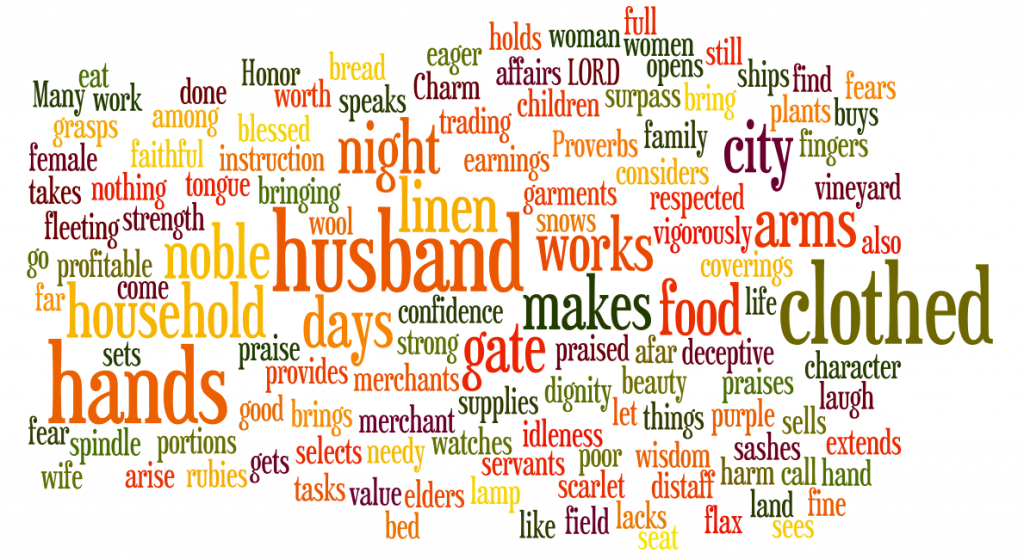 On Earth As It Is In Heaven

Jesus brings the Kingdom to earth. He does God’s will on earth just as it is in heaven.

“Your will be done on earth as it is in heaven.”

Are you praying this prayer? Jesus said it was a good idea to pray this prayer, to ask God to please do his will on earth just like it’s done in heaven. Are you bringing the Kingdom of God to your part of the earth? Are you obeying his will like the rocks and the trees and the oceans and the animals obey his will?

Is the will of God being obeyed in your church just like it is in heaven? In your elders’ meetings? In your congregational committees? In your marriage? In your family around your dinner table at night? Are you bringing the Kingdom of God to your workplace? To your school? To the Little League team you’re coaching or the civic club to which you belong?

If God has completely eradicated selfish behavior and gamesmanship and competition in heaven, if that is his holy will, why would you insist on bringing any of that into his Church? Or putting up with it?

The rivers and the trees and the squirrels and the fish all obey God’s will on earth just as it is in heaven. What’s wrong with us?

Rodney Ashlock had just begun his Sermon Seminar session on the book of Esther Tuesday evening when the WeatherBug app on my laptop started chirping. I opened it up to learn that a tornado warning had been issued for parts of Tarrant County that included my home in North Richland Hills. A quick check of the radar revealed an ominous red and purple blob heading right for my neighborhood and a pretty impressive hook echo bearing down on my house.

I dashed outside the lecture hall there on the Austin Grad campus to check in by phone with Carrie-Anne and the girls. She answered her cell phone and her voice was almost drowned out by the sound of the sirens. Before I could get more than a couple of sentences out, I heard our house phone ring. She kept me on line as she answered it. It was the city, calling to warn residents of the coming tornado and to urge them to seek immediate shelter. I asked if she and our daughters were OK.

“Yeah, we’re hiding in the laundry room with the radio and the phone. We’ve got a couple of mattresses in here. The girls are a little nervous. And I’m putting clothes in the dryer.”

Now THAT is a wife of noble character! Protecting the children and doing the wash! Who can find a woman like that? She is worth far more than rubies. Her husband has full confidence in her and lacks nothing.

Too much Dirk last night for the Thunder. Too much Dirk. Here’s hoping Chicago can somehow force a couple of more games in the Eastern Conference series to wear out that unholy trio in Miami and buy the senior Mavs some much-needed down time.