Enslaved by Our Phones 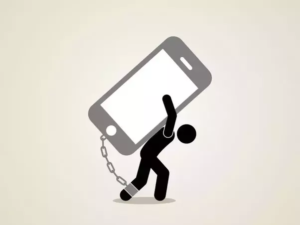 Quick story before we jump into the final installment of this four part look at our phones: There were more than a hundred people downstairs in Sneed Hall last night listening to Aleisha and our Central youth group give a report on their recent mission trip to Sao Paulo, Brazil. About halfway through the report, right in the middle of Aleisha explaining in great detail the marvelous things our God is doing in South America, she was interrupted by the sound of at least 90 smartphones going off at the same time with a flash flood warning for Randall County. It was a loud and obnoxious alarm — you know the sound — that took a full 90-seconds or more to shut off. Some people in the room didn’t know how to turn it off and it took a while. Others received the warning a minute or two later. The alert was still sounding on various phones throughout the room for a full six or seven minutes. Of course, nobody just turned off their phones. Some people went outside to look at the clouds. Others texted their friends, others checked the radar, others sent and received pictures from family members who were not at church. For at least the next ten minutes, most everybody in the room was on their phones, heads down, engaging something or somebody else who was not in the room. These phones are not neutral. They are designed to distract. Mission accomplished.

Wait. One more quick story. After the mission report, I went to my office where our management cluster was meeting. I pulled out my phone — my slider — to text a deacon to make sure he was coming. And all three of the other men in the room — all elders of our Lord’s Holy Church! — made fun of my phone. They expressed disbelief and reacted with laughter at the ridiculousness of anyone owning such a phone. Fascinating, right? Who cares? It’s a phone. Again, this goes back to my question on Tuesday: Why are people so compelled to judge and/or make fun of those who don’t use smartphones? Why all the hate? It’s a phone!

Actually, that leads us pretty well into today’s final topic.

It seems to me we are working on the premise that all people are slaves to their phones. We not only live in a world where everybody is expected to have a smartphone, we also live in a world where it is impossible to even imagine anybody not having one all the time and using it for everything.

I’ll use a line or two from Dr. Keith Stanglin’s essay and a recent experience with Dr. John Weaver, the director of technology for Abilene Christian University, as talking points here. First, Keith:

“Our modern world is in bondage, in a way that no other era has been, to a consumerism that touches rich and poor alike… Keeping up with the Joneses has never been as important as it is now, where your status is determined by the kind of phone you carry and vehicle you drive. This is not the pursuit of the good life, but of the “goods” life. As a society, we are not freer, but more enslaved. Nowhere is this self-imposed slavery more evident than with smartphones.

If this seems like an exaggeration, then call to mind the lines that stretch for city blocks when each new iPhone is released, an event that has taken place every year since 2007. The thing that people couldn’t wait to have eleven months ago is now obsolete. Why, they wouldn’t be caught dead with an iPhone 6! Making us discontent with our present possessions is the fuel that drives this part of the economy. And such lack of contentment is directly opposed to the teaching of Jesus and the apostles.

We have to hand it to the marketing and advertising departments. If the goal is to make people desire today something they had no idea they even wanted yesterday, and, by tomorrow, turn that want into a perceived necessity that they cannot live without, then the marketers have been wildly successful. If you resist this consumerist cycle and don’t drink the Kool-Aid, you will be mocked by the cultured despisers. Trust me.”

The guiding question for his sessions was “How do we grow / mature / be faithful in the digital world?” His answer was to not reject the technology and the phones, don’t throw the baby out with the bathwater. Use the technology in a way that’s helpful. His main directive on this point was that we should turn off our devices but, because that’s impossible, try to use them in a responsible way.

The whole thing was very enlightening for me. He cited study after study, all the research, that says reading your Bible on a screen is not the best way to read your Bible. It’s impossible to engage the text on your iPhone — all the sidebars and pop-ups and other apps that are native to the design of the device. He acknowledges that it’s hard to concentrate on a passage of Scripture when he sees out of the corner of his eye that he just received an email from his wife. He knows and preaches that reading the Bible on a phone relegates God’s Word to just another story or tweet or video that is quickly consumed and then discarded and makes it much harder to remember. Yet his great advice is to use a Bible app that will schedule your reading for you and will disable the pop-ups and emails while you read. On your phone.

He never once suggested putting the phone down, picking up a print Bible, walking out of the room, and spending 30-minutes in reading and meditation. It appeared as if the thought never occurs to him.

Weaver talks about the ways our technology and phones distract us from important things, how they keep us from doing what we know we should be doing. We should turn our devices off, he says. We should plan time to be alone with God without the distractions from our phones. The phones are a barrier between us and our relationships with Christ and one another. So, what’s his life-changing suggestion? Program your phone to alert you to turn it off.

If the phones have to tell us when to turn them off, who’s in charge here?

This well-meaning man never once let on that he understood the irony of his presentations. Since we’re on our phones and laptops so much it’s harming our relationships and forming our brains and habits in undesirable ways, you should use a screensaver with a Bible verse. You should use a background to remind you about God’s presence.

It’s outside the realm of possibility and even imagination to suggest not using a smartphone for every single waking and some sleeping moments of the day and night — even as we know the harm we’re doing to ourselves. 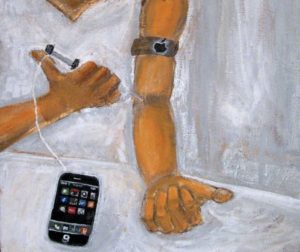 Can you leave your phone in the car to go into a restaurant for an hour-and-a-half and eat dinner with a friend? Are you able to leave your phone in the office while you go down the hall to talk to a co-worker? Can you go 30-minutes without checking your phone to see if you’ve received a text or a Facebook alert? Would you be able to go to Bible class or a worship assembly without your phone? If any of those scenarios cause your heart to beat faster or your forehead to sweat, if the very thought gives you anxiety, is that a problem? That seems like a problem.

When you’re talking to somebody in person, do you take your eyes off of them to check your phone? Do you interrupt a face-to-face conversation to read a text or to answer a call or to fact-check your friend? Do you spend more time on your phone, swiping and clicking and scrolling, than you do in real talking and listening to your family and friends? Or to God? Is that a problem? Seems like a problem.

“The reality is that we are in a new situation that will not soon be reversed. It is a situation analogous to that of Moses, who tried to regulate divorce for the hard-hearted. It is like the challenge facing the apostle Paul, who tried to regulate the conduct of slave-masters in a society that assumed the practice. We must start with and accommodate the premise that almost everyone is already enslaved to their electronic devices.

The question we must ask, then, reflects the challenge faced also by Moses and Paul: how can we infuse into this less than ideal situation a measure of perspective and good sense?

We cannot deceive ourselves into thinking that our justifications or solutions — for instance, ‘I can read my Bible on my phone!’ — are ideal. They are terrible accommodations, and we should rather be clear-eyed about the extent of the enslavement. How can we pull ourselves up a level or two on the continuum of human flourishing that smartphones threaten to drag us down?”

Again, my concern is not that you agree with me. My concern is that we “think” and not just “do.” My concern is that God’s Word and the teachings of Jesus have a prominent place at the table during any conversations about technology and phones. Our beliefs and our behaviors about our phones should be informed by Scripture and by the life and death of our Lord.

Leave it in the car.