Creation and Salvation in Connecticut 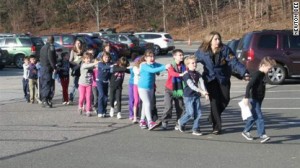 I was preparing to write today’s post about Josh Hamilton and the Rangers. It wasn’t going to be a very long post. My main concerns with the team are not with losing Hamilton. Or Michael Young. Or Mike Napoli. My main question is: Why don’t big-name, free-agents want to play in Arlington? I’ll write more about it later. Maybe.

While I was heading to the Dallas Morning News website a few moments ago to get some stats I wanted for the post, I learned about the elementary school shooting in Newtown, Connecticut. And everything has changed for me now. I can’t write about baseball. Baseball is insignificant. It’s meaningless. ~~~~~~~~~~~~ 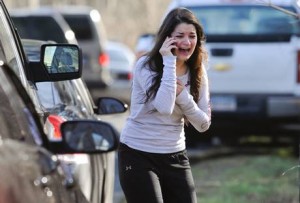 We Americans live in a decidely violent culture in an increasingly violent country. We’re eaten up with violence. We watch it in the movie theaters and on our TVs. We sing about it along with the radio. We joke about it with our friends.We cheer war. Our kids (and adults) use violence in their video games. And it shows up more and more and more in our local and national newscasts. A movie theater in Colorado. A shopping mall in Oregon. A football stadium in Kansas City. A downtown bar in Amarillo. An elementary school in Connecticut. It’ll be something else tomorrow or the next day. Just another bloody shooting on another screen?

We’re surrounded by violence at this church. Talk to Patty who was baptized into Christ last week. Or Amanda or Melinda who put on Jesus as Lord last month. Talk to any of the people at Prayer Breakfast or Loaves and Fishes around here. There is a severe shortage of respect for human life. We are confronted every day — usually through news outlets but, sometimes, face to face — with senseless violence by and against children of our God who are created in his holy image. And it sickens me.

This is the kind of thing that makes us cry out to our God, “How much longer, Lord?”

It’s also the kind of thing that turns a lot of Christians against God’s creation. A lot of Jesus followers believe that our salvation is a divine rescue from the evils of the world. Salvation from God, a lot of Christians believe, is salvation from the flesh, from being human, from living in a world of skin and bone, free will and choice, people and things. There are a lot of disciples who don’t seem to care much about the world. “It’s all going to be burned up anyway!” they say. “Heaven holds all to me,” they sing. So much so, I’m afraid, that they separate salvation from creation. To many Christians, the world and whatever is of the world or in the world is evil and worthless and sad. We don’t care about the world. We’re being delivered from the world.

But the Incarnation of God drastically counters that viewpoint.

The birth of our Lord Jesus, instead of separating creation and salvation, actually connects creation and salvation. It joins the realities of heaven with the ordinary and sometimes terrible affairs of life on earth. By becoming one of us, God reaffirms the original goodness and purpose of his great creation. Our human condition — even with all our flaws and weaknesses, shortcomings and sins, violence and greed — is not so evil and worthless and sad that God himself is above becoming flesh! In fact, it is Jesus taking on our everyday human condition that is the means for our salvation. God reclaims us and our world as his own by becoming one of us.

You know, not everything that happens is God’s will. In the Gospels, God intervenes to rescue Jesus from Herod. But at the same time, the little boys of an entire village are still slaughtered. That part was not God’s will. It wasn’t providential. And we struggle with the concept of God’s sovereignty and man’s free will all the time. God as all-knowing and all-powerful together with man’s ability to do whatever he pleases is troublesome. It’s complex. God’s people have been debating it since the beginning of time and, I suppose, we always will.

But looking at the birth stories of Christ helps clear it up a little for me. You have this perfectly seamless union of the human and the divine. It’s a story of collaboration. Both elements working together so perfectly — and so mysteriously — we’ll never figure it out. But the Incarnation gives us a sense of the big picture. God is indeed sovereign. He does have plans for his world. And he has the authority and the power to intervene and control things any time he pleases. But there’s no reason to create us and seek a relationship with us if our lives are already programmed  and scripted.

What we see in the birth of Jesus is not God controlling or manipuating the situation. We see God joining us in a partnership. Some people, like Mary and Joseph, cooperate beautifully. Others, like Herod, don’t. God allows and he honors both sets of choices. And he works through both sets of circumstances. He is God with us, not God instead of us.

Yes, all of creation is groaning. We read about this latest school shooting in Connecticut and we realize we live in a sinful place in a fallen world. Today, especially, again, we are groaning as in the pains of childbirth to become what we were truly created to be.  And it seems impossible for this horrible stuff to be redeemed. How can it be salvaged? Where is the good? Just come quickly, Lord, and take us all away from here.

He created our “here.” And he’s working to fix it.

Our merciful Father is at work today in Newtown, Connecticut. He’s joining creation and salvation today in mighty acts of grace and love, service and sacrifice. He’s redeeming that entire situation and the hundreds of people there who are mourning intense and personal loss.

We’ll become more like our Christ when our hearts ache at the loss of human life like our God’s heart does. We hurt when his creation hurts, we groan with all of creation today. And we look for his gracious acts of forgiveness and reconciliation. We look for signs of the salvation he is most assuredly bringing.