Act Four is where the Story of God just absolutely soars. It really takes off here and just zooms majestically into beautiful places we never anticipated.

God himself comes back to the earth he created to live with his people. But this time, he comes as a person. The Creator of Heaven and Earth puts on human flesh and blood to live with us and to once and for all save us. This time, God doesn’t send an angel or a prophet or some other representative. He leaves his home in eternal glory to live with us himself. This time, God is not forming man from the dust; God himself enters that dust, he becomes that clay. This is very personal God. After all, it’s his promise.

“You will be with child and give birth to a son, and you are to give him the name Jesus. He will be great and will be called Son of the Most High. The LORD God will give him the throne of his father David, and he will reign over the house of Jacob forever; his Kingdom will never end.” ~Luke 1:31-33

Jesus says “I came to seek and save the lost.” “I came not to be served, but to serve and to give my life.” “I have come to proclaim the Kingdom of God.” “I have come that they may have life and have it to the full.”

Jesus of Nazareth is a real flesh-and-blood man in the real history of time and space. But he is also God. “If you’ve seen me, you’ve seen the Father.” “I and the Father are one.” And God did not come just to save us from our sins, he came to save us to life: more abundant life, eternal life, life in union with God as true sons and daughters of God.

So God becomes flesh and makes his dwelling among us. And he immediately begins to overturn the effects of sin and death. He starts to change things back to the way they were in Act One. Jesus begins to reverse the curse of sin.

“Jesus went throughout Galilee, teaching in their synagogues, preaching the good news of the Kingdom, and healing every disease and sickness among the people. News about him spread all over Syria, and people brought to him all who were ill with various diseases, those suffering severe pain, the demon-possessed, those having seizures, and the paralyzed, and he healed them.” ~Matthew 4:23-24 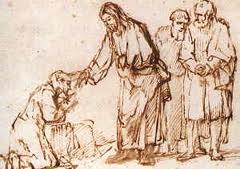 Jesus heals the sick because there is no disease in the Garden of Eden. He feeds the hungry because there is no need in the Garden of Eden. Jesus raises the dead because there are no cemeteries in the beginning. He eats with Jews and Gentiles, he shares meals with religious leaders and sinners, because there were no distinctions in the Garden. He reaches out to women and elevates women, he calls and commissions women, because Adam and Eve were equals in the beginning. He calms the storms and stills the seas because earth and nature were created to cooperate with people, not destroy them. Jesus forgives sins because humans were created by God in the perfect image of God in order to live and reign with God in his presence forever.

Jesus is actively reversing the curse. He’s making all things right. And he is with us. Immanuel. God with us. Eating with us, worshiping with us, laughing and crying with us, blessing our children, living with us. Changing lives. Saving lives. Thousands of people traveled miles and days just to hear the words fall from his lips, just to feel the love in his gentle touch. Little kids were crawling all over him. People were climbing trees just to see him, ripping roofs off houses just to get to him.

And then Jesus did something only he could do. He did something to finally and ultimately and completely reverse the curse, to destroy the effects of sin and death forever.

He died on a cross.

Jesus resolutely set his face toward Jerusalem and walked to the cross. He allowed himself to be beaten and tortured. He allowed them to nail his hands and feet to the blood-soaked wood of a cross. He died willingly. He sacrificed himself. He could have called ten thousand angels. But he died alone. For you and me. It’s what Jesus came to do. The Lamb of God who dies to take away the sin of the world.