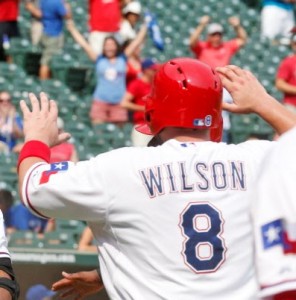 The Texas Rangers’ magic number for clinching their sixth division title is “8.” After last night’s clubbing of the A’s, Texas has its largest division lead in more than two years at 3-1/2 games. Texas has won Cole Hamels’ last seven starts, and he’s pitching the getaway game today in Oakland. And then they fly to Houston for this critical three game weekend set with the Astros. As good as Texas has played in September (14-7) and as badly as Houston has played this month (7-14) it’s still going to come down to this weekend series. Going to Houston with the division lead sure helps. Taking two of three from the ‘Stros would just about clinch it.

Act Five of the Story of God is where all of us are suddenly pushed out onto the stage. The lights come up, the curtain opens, and we’re on the stage with lines to say and parts to play. We’ve been given a role in the Story of God, an important role. This is not just a cameo appearance.

On that first Sunday morning, the women arrive at the tomb to find the stone has been moved and their rabbi Jesus is not there. And the angel says:

“Don’t be alarmed. You are looking for Jesus the Nazarene, who was crucified. He has risen! He is not here. See the place where they laid him. But go, tell his disciples and Peter, ‘He is going ahead of you into Galilee. There you will see him, just as he told you.'” ~Mark 16:6-7

In other words, look, everything Jesus told you about the coming of the Kingdom of God — in his work, his teachings, his life and death — has all come true! The Resurrection is not just a miracle to show us how powerful God is. It’s not just a way of showing us there is life after death. The Resurrection of Jesus is the decisive event that proves God’s Kingdom has been launched on earth. The Resurrection completes the inauguration of God’s Kingdom. It’s not, “Hey, Jesus is risen, it looks like we all get to go to heaven when we die.” It’s more like, “Hey, Jesus is risen, you’d better get to Galilee and check in; see what he wants you to do.”

“He is not here; he has risen, just as he said. Come and see the place where he lay. Then go quickly and tell his disciples: ‘He has risen from the dead and is going ahead of you into Galilee. There you will see him.'” ~Matthew 28:6-7

When Jesus ran into these women at the tomb, he tells them the same thing:

“Do not be afraid. Go and tell my brothers to go to Galilee; there they will see me.” ~Matthew 28:10

“Then the eleven disciples went to Galilee, to the mountain where Jesus had told them to go… Then Jesus came to them and said, ‘All authority in heaven and on earth has been given to me. Therefore, go and make disciples of all nations, baptizing them in the name of the Father and of the Son and of the Holy Spirit, and teaching them to obey everything I have commanded you.” ~Matthew 28:16-20

Jesus is claiming all authority in the universe now belongs to him. And by that authority he commands his disciples to go now and make it happen. Go do the Kingdom work as agents of my authority. Jesus is now enthroned as Lord of heaven and earth. His Kingdom has been established. And now his Kingdom rule is to be proclaimed. Jesus’ ambassadors are told to declare the Good News to all the nations and to call all the territories to allegiance to their new Lord.

“This is what I told you while I was still with you: Everything must be fulfilled that is written about me in the Law of Moses, the Prophets, and the Psalms… The Christ will suffer and rise from the dead on the third day, and repentance and forgiveness of sins will be preached in his name to all nations, beginning at Jerusalem. You are witnesses of these things!” ~Luke 24:44-49

There’s a new order. New rules. New law. Everything’s brand new for all the nations. The enemy has been destroyed. Peace between God and all people has been established. The good and just reign of the true King of the world has begun. Jesus is Lord over all the earth today, tomorrow, and for ever more! True peace. Genuine security. And Jesus, the King, says to his disciples, “You go tell everybody the Good News!”

In the mid 30s AD, this is what a King does when he becomes the ruler over a new region.

In Matthew, the first words spoken by Jesus following his Resurrection are, “Greetings. Do not be afraid. Go and tell.” Later, that same evening: “Go and make disciples of all nations.” In Mark, the first recorded words of the risen Jesus are, “Go into all the world and proclaim the Good News to all of creation.” In Luke, Jesus says, “The Good News is going to be proclaimed to all nations.” Same thing in John when, on Resurrection day, the King’s first words to his disciples are, “Peace be with you. As the Father has sent me, I am sending you.”

Jesus is Lord. Jesus is now the undisputed King over all the earth. And his messengers, his emissaries, are to go to all the territories where Christ is enthroned as Lord to proclaim the Good News of his righteous rule.

“You will receive power when the Holy Spirit comes on you; and you will be my witnesses in Jerusalem, and in all Judea and Samaria, and to the ends of the earth.” ~Acts 1:8

And that’s exactly what happens. And please notice — this is the main point — they don’t just offer people a new and different religious experience. They don’t just teach about eternal life after we die. They don’t just preach the Resurrection as a miracle that proves how powerful God is. The disciples are commissioned by Jesus to go and tell the world that Jesus, the Messiah, really is the world’s true Lord and to call all the nations of the earth to submit now to his rule.

Act Five. The Proclaimed Kingdom. There is where we come in. We are living today in the unfinished fifth act of the drama of the Story of God. God’s Church was established by the Holy Spirit on the Day of Pentecost in order to proclaim to the world the Good News. We are telling all nations that God has come here in the flesh-and-blood of Jesus to establish his rule and to forgive and redeem and restore all the men and women of the earth. We are no longer enemies of God. It’s truly Good News! And we are called to declare it to all the earth.

Now, you are not exempt from this part of the Story. In this Act Five, you are not in the audience. You’re not backstage. You’re not a spectator or a critic. You’re not selling programs in the lobby or reading about it the next day. You are on the stage. You have lines to say. You have a role to play. To borrow from Robin Williams in Dead Poets Society, “The powerful play goes on and you may contribute a verse.”

You must contribute a verse. All of us who have been baptized into the death, burial, and resurrection of Jesus are commissioned to jump into the Story and proclaim the Good News. In Act Five, following the Resurrection of Jesus all the way through the rest of the New Testament, all the characters in the Story are proclaiming. Church leaders, church members, all Christ followers do the work of evangelism. It’s the number one priority for all disciples. No exceptions. Everything takes a back seat to the proclamation of the Good News. Everything serves the purpose of proclaiming the rule of Christ and the Kingdom of God. That is our role today in Act Five.

What will your verse be?