“Do I take any pleasure in the death of the wicked? declares the sovereign Lord. Rather, am I not pleased when they turn from their ways and live?” ~Ezekiel 18:23 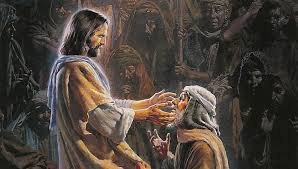 The Bible tells us God wants all men and women to be saved and to come to a knowledge of his truth. And our God doesn’t just make that change possible, he makes it his top priority. He’s so committed to your change, he gave up everything to come here in person to show us what it looks like.

The sinful woman at the Pharisee’s house where Jesus is eating is a prostitute. She’s a woman of ill reputation. Exchanging sex for money. Maybe she had terrible parents. Maybe her husband died. Maybe at the time she saw no other way. She’ll be a sinner her whole life, right? Nobody will give her another chance. She’s a hooker! But she comes to Jesus. She kisses the Christ and anoints him in a selfless, dependent act of true repentance. And Jesus says to her, “Your sins are forgiven. Your faith has saved you. Go in peace.” And she leaves that dinner party a changed woman. The Son of God has given her life. Christ Jesus changed her. 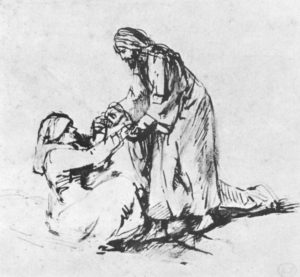 The man on the side of the road was born blind. Blind since birth. Really bad luck. He’s going to be a beggar his whole life. It’s awful. He’s blind! Jesus’ disciples ask, “Why is this guy blind? Somebody sinned here. Was it him or his parents?” And Jesus says, “Nobody sinned. This happened so the work of God can be displayed in his life.” And Jesus heals him. Jesus gave the man his sight. The man says, “This is from God!” Jesus changed him. He gave him life.

The naked demon-possessed guy. No name. No clothes. No home. No family. No community. No nothing. Satan had taken from this guy everything it means to be made in the image of God. He’s been conditioned by his village to believe he’s destined to live among the dead. But he comes to Jesus. And he’s changed. He’s wearing clothes. He’s in his right mind. He’s got a home. He has a family, a community. And he’s got a mission.

Zacchaeus was a selfish, crooked tax collector, hated by the people of God and an outsider in his own town. But Jesus calls him and now he’s giving half of everything he owns to the poor. He’s repaying the people he stole from four times the amount he took and he’s being called a son of Abraham by the promised Messiah. He’s changed.

The Samaritan woman was the town sleaze. Now after an encounter with Jesus she’s the town evangelist. She’s changed! Saul was the Church’s biggest enemy, the killer of Christians. But just a little talk with Jesus and Paul is the greatest writer and preacher and church planter in history. He’s changed! The Philippian jailer was beating Silas. Now he’s washing Silas’ wounds and cooking him dinner. He’s changed!

“Am I not pleased when they turn from their ways and live?” ~Ezekiel 18:23

If you’re an alcoholic. If you’re a mean-spirited person and your overly negative and critical because that’s the way your dad was. If you’re addicted to pornography and you have been for almost 20 years.

You can change. Jesus says, “I am the bread of life. Come to me and you’ll never be hungry again.”

If you’re arrogant or selfish because everybody in your line of work has to be that way. If you’re an adulterer. If you use illegal drugs. If you’ve tried to quit six dozen times but you keep sliding right back in and there’s nothing you can do about it.

You can change. Jesus says, “Come to me. Come to me and drink living water.”

You can change. Jesus says, “Whoever comes to me, I will never drive away.”

“Rid yourself of all the offenses you have committed, and get a new heart and a new spirit. Why will you die? I take no pleasure in the death of anyone, declares the Sovereign Lord. Repent and live!” ~Ezekiel 18:31-32