To hold you over until my traditional Labor Day game-by-game prediction of the upcoming Dallas Cowboys football season, I’m providing you with links to two outstanding pieces that are (mostly) about football. Both of these articles are “must read.”

First, let’s go to the Colin Kaepernick national anthem protest that has ignited a DEFCON4 firestorm of outrage and controversy. (First, take a very, very deep breath. Now, exhale. And read quietly to yourself.) 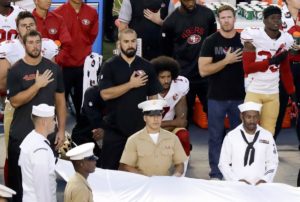 I have never, ever, one time, ever agreed with Mavericks owner Mark Cuban about anything. Ever. But I find myself completely down with Cubes and his angle on Kaepernick’s silent sit-in during The Star Spangled Banner. Cuban tweeted earlier this week, “He didn’t throw a bomb, fire a shot, start a riot, throw a punch, shut a business, yell at someone, troll anyone. He just sat there quietly.”

Thank you. I don’t understand how a person is supposed to protest in this country. We scream and yell and condemn any person who uses violence or vandalism as a protest, and rightly so. We see far too much of it, daily it seems, in the United States. Violence or vandalism or any other type of law-breaking as an act of protest cannot be condoned or allowed. Non-violent protests and silent sit-ins have always been the most honored and traditional and effective and respected forms of protest in the short history of this country. His protest is by the time-honored and approved method, right?

Plus, has anybody noticed the terrible hypocrisy of condemning professional and college athletes for not speaking out on political matters, for not using their voices to effect positive change, and then ripping them to shreds when they do? Now, the pig socks are out of bounds. Not cool. I lose respect for what Kaepernick’s doing, and what he’s doing loses credibility, because of those obscene socks. That’s name-calling and labeling and generalizing and insulting — the very things he’s supposedly protesting. It’s not OK. I’m not good with the socks as a form of protest. They’re mean-spirited and do nothing to foster conversation and debate. But is a celebrity/athlete supposed to speak out or not? It seems they’re brewed either way.

Lastly, and most importantly, as Christians, where are our/your priorities? Or, asked another way, why don’t we Christians get just as upset when we catch somebody talking or texting during the singing of “How Great Thou Art?” Why aren’t we Christians reposting Facebook memes ripping to shreds people who don’t take off their caps when we pray? Why are we followers of Christ so over-the-top incensed about someone not “showing respect to the American flag,” yet we don’t give it a passing thought when someone walks out of a baptism service or gets up to use the restroom during the reading of Holy Scripture. Why are our priorities so out of whack?

OK. That’s my angle. That’s not the “must read” stuff. The really good article that puts a lot of this in a wider perspective is written by Sports Illustrated columnist Charles P. Pierce. He gives us a brief and entertaining history of the American anthem, a thorough examination of the politics of The Star Spangled Banner, and a balanced view of the Kaepernick mess. You can click here to get to the excellent article.

The other article you have to read this weekend is the cover story to the current issue of Texas Monthly. It’s by Michael J. Mooney about Tony Romo. It’s called “The Last Best Hope of Tony Romo.” It was written one week before Romo broke his back on the third play of last Saturday’s preseason game in Seattle. It’s a wonderfully written preview of Romo’s upcoming season, imagining the best and the worst of what’s possible. This is the year Romo writes his legacy. It’s genius. Looking back now, it’s genius. Romo detractors will glory in the piece; Romo supporters will, too. It’s wonderful and tragic, at once beautiful and horrible — just like Romo. You can click here to read the full article.