If I were Skip Bayless, I’d write this morning that the “Cowboys O-Line Almost Costa Game!” 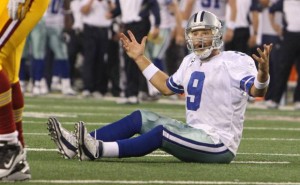 I detest the way Jon Gruden was wanting to ship Tony Romo’s cleats to Canton for immediate induction. But I give a

lot of credit to the Cowboys’ quarterback for last night’s never-say-die, gut-it-out win over the Redskins. Romo was like a rookie catcher behind the plate with Charlie Hough or Tim Wakefield on the mound: just wait for the ball to stop rolling and pick it up. He had no help from his line or his receivers. He really is playing with a cracked rib. And the long scramble and throw to Dez on that late third-and-forever was a clutch play.

Still, that line is going to be the end of this team. If the secondary doesn’t kill ’em, that offensive line will. And I keep waiting for somebody to put out the over/under on when Rob Ryan goes all “Buddy Ryan punching out Kevin Gilbride on the sidelines” when Jason Garrett’s offense blows another first-and-goal at the two yard line or fumbles in the red zone after a tough defensive stand. Will that happen before, during, or after the November 20 game at Washington?

This is an 8-8 team that’s going to miss the playoffs again. But, as always, it’s a whole lot of fun to watch.

The Bible makes some pretty bold assumptions that we would all do well to recover. Scripture envisions the world as a much different place than the one we see and experience every day. The Bible calls us as children of God to live into the world differently than everybody else does, to challenge it, to change it. The Bible says that the world as it is right now is broken, it’s messed up, it’s not right. God wants it to be right, he’s working every moment to fix it. And as his agents of reconciliation, we are commissioned by him to live in such a way that moves things along in the right direction.

The Bible is a scandalous document. If you read it correctly, it can’t be ignored. And it calls us to be radically different from all that’s going on around us. We don’t conform to the culture; we convert the culture. And that’s tough.

In her book, An American Childhood, Annie Dillard asks why in the world her parents wanted her to read the Bible. She can’t understand why her mom and dad wanted her to study and memorize Scripture:

“If they had really read it themselves, I thought, they would have hid it from us. They didn’t recognize the vivid danger that we would, through repeated exposure, catch a case of its wild opposition to their world. Instead, they bade us study great chunks of it, and think about those chunks, and commit them to memory. And ignore it.”

Scripture is challenging. The words of the Bible shatter all our assumptions about life. They command us to seek justice, not just order; they demand that we show respect, not just politeness; they mandate that we act in love, not just friendliness.

That’s dangerous. It’s like quoting from the Declaration and Address — one of the Church of Christ’s founding documents — to a Church of Christ congregation. We don’t realize our faith and practices and traditions originate from such powerful words. Words that still challenge today. Words that call us to be different. Words that call us to partner with God in changing everything that’s wrong with his world. Words we cannot ignore.