Wrestling Together In Prayer

God’s people are battling the enemy in the valley. Up on the mountain, Moses is lifting his hands in prayer. He’s 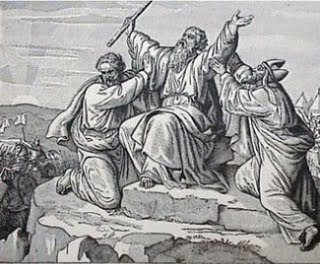 interceding for the people. He’s taking them to God.

And his arms get tired. His hands drop. He can’t go on. It’s too much.

And that’s why we do it together. As Aaron and Hur joined Moses and physically held his arms high, we help each other by praying together. We strengthen each other. We raise each other up as we pray. We give and receive mutual encouragement. We declare together our trust in God to deliver.

The Legacy 24 Hours of Prayer begins one week from today. It’s one of my top two or three most anticipated and favorite events of the year. The men of this church family are meeting in one-hour shifts from 8:00 next Friday morning through 8:00 next Saturday morning, around the clock, to raise close to two-thousand prayer requests to our God.

Nothing builds community and relationship and trust like spending an hour together in a foxhole, battling Satan in open and honest prayer. You can learn more about your Christian brother and his heart and his mind and his soul in one hour of prayer than you can in one year of going to football games or taking hunting trips together. Wrestling together. Supporting one another. Bearing one another’s burdens and giving them to our gracious God together.

The Rock here at Legacy becomes our mountain of prayer one week from today.

Two more days until the Dallas Cowboys kick off their 50th season in the NFL. And today’s #2 in our Red Ribbon Review of the second-best players in Cowboys history according to jersey number is backup quarterback Anthony Wright. A free-agent out of South Carolina, Wright actually started five games for the Cowboys in his two seasons here, 2000-2001. He went 1-4 as a starter, his lone win coming against the Redskins at Texas Stadium by a score of 9-7. Wright completed 46.4% of his passes as a Cowboy, throwing five TDs and eight picks. He finished with a QB rating of 50.8 and as the second-best #2 in Cowboys history.

Catching up on the countdown from the past couple of days: #3 is kicker Billy Cundiff, a 2002 graduate of Drake University who never missed a field goal of less than 30 yards as a Cowboy. He played in Dallas from 2002-05, missing only one PAT in those four seasons (100/101) and hitting 73.2% of his field goals.

The second-best #4 in Cowboys history is punter Toby Gowin. A Mean Green Eagle from North Texas, he punted for Dallas for three seasons, from 1997-99, and was then released as a free agent. He bounced around the league for a couple of years and then re-signed with Dallas in 2003 on an unheard of five-year-contract. It lasted one year. Gowin punted a total of four seasons for the Cowboys: 64 games, a 41.7 yards per punt average, and a long punt of 72 yards in 1997. The most interesting thing about Gowin’s Cowboys career is his rushing average: 33 yards per carry. On one carry in ’98.