I’ve been alive for a little over 43 years. And not once, ever, never has it even occurred to me that it might be a potential possibility — ever! — that I might have to shovel snow. I’ve never even entertained it as a possibility. Never! But there I was Friday morning: an inclined driveway covered with nearly a foot of snow, one car in the garage, and one truck stuck. I just stared at the mess. What in the world am I going to do? And I looked three doors down and saw my neighbor shoveling his driveway.

The backs of my legs are still sore.

We measured anywhere from nine inches to eleven-and-a-half inches in various places around our yard Friday. So beautiful. So crazy. The biggest single snowfall in DFW history. It started at about 3:00am Thursday morning and didn’t stop until a little over 24 hours later. The girls and I built three snowmen, made six snow angels, threw 300 snowballs, and soaked through twelve total pairs of jeans.

And, true to form, most of it had completely melted by Sunday morning.

What an amazing couple of days, though, it was. So beautiful. So crazy. So unexpected. So thoroughly enjoyed by all of us. Thank God for his gracious and unforeseen blessings. Thank God for these marvelous displays of his power and love. And give him praise for the opportunities to bask in those blessings through the eyes and the energy and the joy of our children.

School district websites were busy Thursday morning as most every parent of a school-aged child was checking to see if classes were going to be disrupted by the weather. It so happens that, at the time, the Hurst-Euless-Bedford I.S.D.’s website was featuring a front-page story about an elementary school fundraiser at an area McDonald’s a couple of weeks earlier. C-A and the girls and I had gone to that MickeyD’s that night to support (rag) Cori Brown. And I wound up in the background of the picture on the school’s website. Lots of Legacy folks emailed me that morning, commenting on the picture with their own personal brand of humor.

The funniest comment though came from Jason Wolfe who observed that the employee actually featured in the photo looks like the bizarro Aaron Green. 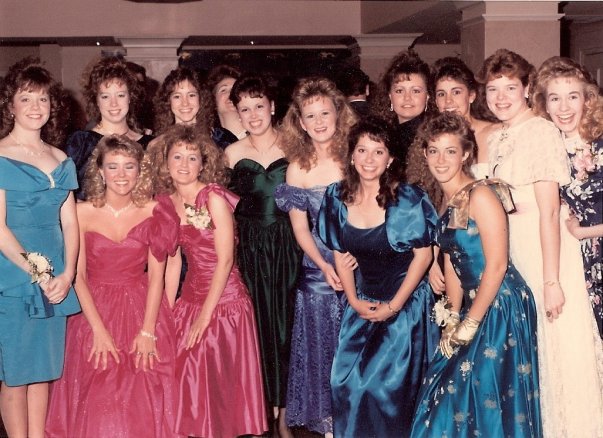 Here’s a picture that’s been floating around various Facebook pages recently. (I don’t do Facebook; I’m going to be the very last person in this country to join Facebook.) See if you can pick out Carrie-Anne and Shanna (Corley) Byrnes. They’re standing right next to each other in this 20-year-old photo, wearing almost the exact same dress. They were both at Oklahoma Christian at the same time. Same club. Even dated the same guy. Now we’re co-leading a Small Group

Thank God for family and friends, for holy relationships that encourage and build-up, for Christian love that supports and sustains.

And for giving us all the ability to enjoy life and laugh.