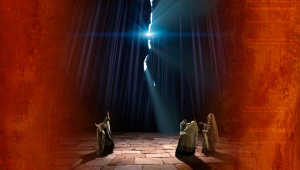 “With a loud cry, Jesus breathed his last. The curtain of the temple was torn in two from top to bottom.” ~Mark 15:37-38

The curtain of the temple was a beautiful and imposing barrier between the people of God and the visible, physical presence of God. The Creator lived in the temple’s Holy of Holies. His glory dwelled there, behind the veil. That’s where God was. And only the high priest of Israel could enter. And he could only go in there once a year, on behalf of the people.

The curtain is described by Josephus as being 80-feet tall, “…a Babylonian tapestry with embroidery of blue and fine linen, of scarlet also and purple, wrought with marvelous skill, woven with the whole panorama of the heavens.”

It was beautiful. Historical. Precious. It was a national treasure. But the curtain was a barrier that separated a holy God from an unholy people. Direct access to the presence of God, to his glory, had always been denied.

But not now. The curtain that shielded God’s glory is now ripped wide open at Jesus’ death. The veil is lifted and now everybody can see the face of God and bask in his glory and love. The barrier between the Creator and his created has been torn away. Religious leaders can’t rope God off from the people anymore. Everybody in the world now has direct access, “through a new and living way,” to a gracious God who has sacrificed so much for our salvation.

No more sacrifices: the Lamb of God has been offered. No more exclusive priests: now all of God’s people are priests and worship and serve together in his actual presence. Even Gentiles are allowed in now. Even women!

This “torn in two” curtain now lets people in. But it also lets something out. God’s glory can’t be confined anymore to a national shrine made of stone and brick. God’s glory now floods the earth. Just like the heavens were ripped apart at the beginning of Jesus’ ministry, at his baptism, and the Holy Spirit descended on him, now the temple veil is torn open and the Holy Spirit of God is now freely available to all!