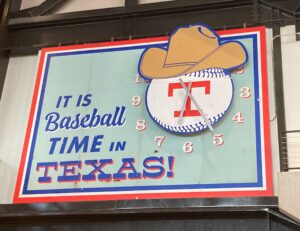 Whitney and I took a baseball road trip to Arlington this past weekend to take in the Rangers and White Sox at that horribly ugly thing they call the new ballpark. And, of course, we had a blast.

We sang Beatles songs together all the way to Fort Worth. We put on our Rangers gear and ate extra cheesy enchiladas at Pappasito’s, our traditional pre-game meal destination. 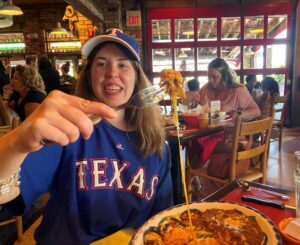 We arrived at that atrocious barn early enough to take a lap around the concourse and comment on all the things we despise about the Rangers’ new digs. We waved at Chuck Morgan in his bulletproof P.A. booth. Whitney bought a Corey Seager t-shirt and I bought a 50th anniversary edition of the Rangers yearbook. And we watched Texas lose 2-1.

The Rangers scored a run on two hits in the first inning, giving us hope for an exciting game and maybe, just maybe, a Rangers win. But then our boys managed only one hit the rest of the way to lose by one. Texas loaded the bases with two outs in the 8th when the White Sox pitcher lost control. He walked two guys and plunked a batter to put the tying run at 3rd base and the potential game-winning run at 2nd. But Leody Taveras chopped at the first pitch he saw and grounded into the inning-ending and, ultimately, game-ending out. 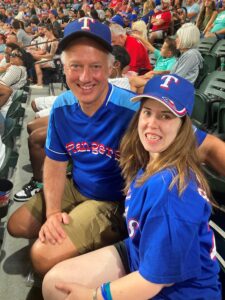 The Chicago pitcher was on the ropes. He was wild. He had walked two and hit one. And with the bases loaded, down one run, in the bottom of the 8th, Taveras didn’t even take one pitch. He didn’t even look. He swung away and bounced it to short. And the game was over.

But I was with Whitney. And a bad day at the ballpark  – even a bad ballpark – is still better than a good day almost anywhere else.