The Voice of Sports 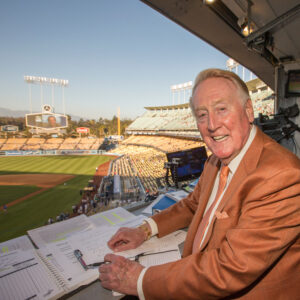 He’s not just the voice of a generation or even of two or three generations. The great Vin Scully’s voice defines sports for us in America. Scully’s iconic voice provided the soundtrack behind some of the most iconic moments in sports history. Hank Aaron’s 715th homerun that bested Babe Ruth’s all-time record was called by Vin Scully. Don Larsen’s perfect game in the 1956 World Series. Kirk Gibson’s dramatic game-winning homer in the 1988 World Series (“The impossible has happened!”) Dwight Clark’s “The Catch” that propelled the 49ers past the Cowboys and into the Super Bowl in 1981 (“Dwight Clark is 6’4”!  He stands about ten feet tall in this crowd’s estimation!). He called thousands of games for almost 70 years, beginning just after his 22nd birthday with the Brooklyn Dodgers in 1950.

Here’s Scully’s call on Dwight Clark’s catch from the ’81 NFC Championship. Click on the YouTube link in the big black box. Sorry.

And here’s a great video recap of some of Scully’s most memorable moments: