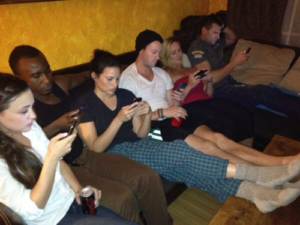 Is there a response to the question, “Why don’t you have a smartphone?” that would satisfy the one asking? Is there an answer that would result in anything other than insult and ridicule? I’m stunned by the ways people react when they find out I don’t have a smart phone. Good friends, family, casual acquaintances — they over react with an odd mix of horror and disbelief and then move straight into overt judgment and shaming. People I barely know are moved to recruit other people to gang up on me: “Have you seen Allan’s phone?!? Allan, show them your phone! Can you believe Allan’s phone!?!” What could I honestly say to avoid the confrontation?

My brother, Dr. Keith Stanglin at Austin Graduate School of Theology, has posted an article on the Austin Grad blog about his own experiences related to his long refusal to own and operate a smartphone. I’m using his observations as a conversation partner to articulate my own feelings in this space. If you haven’t yet, I would encourage you to read his post by clicking here.

Why does my old-style “slider” invite so much ridicule? Why is it such a big deal to people? Is there any other consumer product that opens one so quickly and certainly to public derision? We don’t do this with the brand of TV somebody has in their house. We don’t judge our friends or sisters in Christ according to the kind of car they’ve decided to drive or the size of refrigerator in their kitchen. We applaud fellow Christians when they buy a smaller home or Why is the type of cell phone someone has or doesn’t have such a point of identity and value? 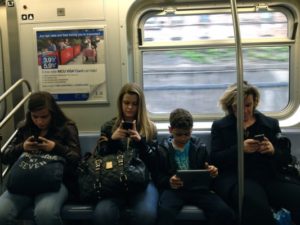 If I say I’m resisting temptation, or I’m fighting my tendency to be distracted, or I’m wanting to avoid the negative impact on my brain and my memory, or I’m trying to save money, or I can be a better disciple of Jesus and a better Christian minister to you with a “slider” than I can with a smartphone — none of those reasons are sufficient. Those statements of conviction either lead to more wonder and insult or to something a little more disturbing: a disbelieving under-the-breath retort about being “holier than thou” and a total shutdown of the conversation. As Keith says:

“Being so ‘behind’ on the latest gadgets, I have found people to be more judgmental about someone’s mobile phone choices than about any other manufactured good. Such reactions are even harder to fathom coming from Christians. If I say that shunning a smartphone is, for me, to shun distraction, temptation, and the world, would it then be an acceptable choice? But why should I have to justify having a simpler phone? I wouldn’t be surprised if there are some churches out there that ridicule people who bring a print Bible to the assembly. Christians, of all people, should respect another’s choice of a simpler automobile, house, clothing, life, and, yes, even phone.”

Yes, I’m afraid there are ministers who preach and teach a simpler lifestyle, avoiding distractions, re-prioritizing, and downsizing in order to better serve Christ and his Church who, in the same breath, ridicule or shame church members who don’t have a smartphone to access that congregation’s app. Maybe it’s OK to own and operate a smartphone. Shouldn’t it be just as OK to not?

Like Keith, I’m not a technophobe or a Luddite, not by any stretch. I use technology every day. I love technology. I’m not sure I could live without air conditioning and indoor plumbing. That 30-second forward button on the DVR is in the top three of the greatest technological innovations in my lifetime and, yeah, I use it unashamedly. I text. I email. I’m into my eleventh year on this blog which you are probably reading on a laptop or a phone. I’m not afraid of technology or change.

But I am careful to discern my personal use of that technology. I don’t just do what everybody else is doing. I don’t think just because we — personally or as a society — can do something that we necessarily should. I’m fifty years old. I have a fairly good idea about what’s good for me and what’s bad for me — spiritually, personally, mentally, relationally. When it comes to my phone, why is that so hard to understand? Or accept?