Our youngest daughter, Carley, is quite the artist. She’s always drawing, always creating on the computer, always painting and coloring. And she loves to read. She’s insatiable. Voracious. She’s the kid who won’t put her book down while she walks from the couch to the kitchen to get a glass of water. She walks and reads. She packs a book for every four-minute trip to Wal-Mart or seven-minute ride to church.

Now I’ve been blown away by a poem Carley wrote for a 5th grade contest at Green Valley Elementary. She read it last night at their poetry recital in front of over a hundred students and parents. And, yeah, it’s very good.

Faith will spread through hearts and minds;
Oh, a feeling so divine.
It lifts you up to higher ground,
saving you from yourself.
Though hope is gone and love is dead,
faith still lives on strong.
So walk with pride, but do not test;
come from the shadows and from the dark;
let this feeling fill your heart.
Come with me; keep your eyes on the prize;
walk on water; fly above.
But come with me, oligopistos,
ye of little faith.

That’s right. My eleven-year-old daughter incorporating some New Testament greek into her fifth grade poem. What could possibly make her preacher daddy more proud? If she ever finds a word that rhymes with homothumadon, look out!

The trash-talking started long before the Mavericks had completed their historic sweep of the Lakers. My sister, Rhonda, who lives in OKC with her basketball freak husband and kids, began texting Whitney and me with predictions of doom for Dallas if they were to meet their beloved Thunder in the conference finals. Once the Mavs beat LA, I started it back up again with, “Would you rather your Thunder beat Memphis in seven games and get swept by Dallas, or lose to the Grizzlies and avoid the humiliation?”

Rhonda and Geoff were in the arena up there in January when the Mavs beat the Thunder in a regular season game in OKC. And they took exception to the way Jason Terry celebrated and, in their words, taunted the crowd. So I get this picture from Geoff on Sunday:

Oh, yeah. It’s on. I’m a little concerned about Kidd and J. J. Barea because the Mavs are facing a young athletic set of guards for the first time all postseason. And there’s no way Dallas will have the same open looks at three-pointers that they got against the older, worn-out, slow to rotate Lakers’ front court. In the end, though, OKC doesn’t have an answer for Dirk. And Tyson Chandler ought to get about five blocks per game. Kevin Durant may average 30-points in this series. And this may very well be his coming out party. But the Mavs will prevail. It just won’t be easy. Dallas in six. 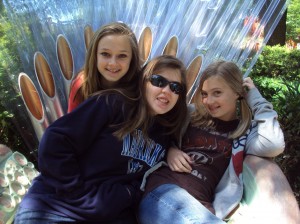 We hauled the girls out to the Dallas Arboretum on Saturday to take in the beauty of White Rock Lake and all the blooms of spring. We also wanted to check out my great friend Kevin Henrichson’s Little Mermaid castle. Kevin’s architectural firm, GHA, designed and constructed the grand-prize winning castle last February as part of the Dallas Blooms exhibits. And it’ll remain on display there with the other fairy tale castles at the Arboretum through the remainder of 2011.

The castle was nice and all, Kevin, but, honestly, I’m much more interested in your other major design and

construction project. Please hurry up and get that In-N-Out location built on Precinct Line!