A Work Of Art

When one is confronted with a masterpiece, with a truly beautiful work of art, it’s never the work that is on trial. It’s the one who would dare to comment on the art. He’s on trial. If you’re standing in front of one of nature’s most glorious wonders or one of man’s most beautiful creations, it’s not the object of your attention that’s on trial. It’s you. Some things are so truly settled, so set in stone, so beyond debate, that to open our mouths and talk about them is not to bring some new revelation to light about the thing, but to make a commentary on ourselves.

Only an idiot would stand at the jaws of the Grand Canyon and shrug his shoulders and say, “Yeah, it’s allright.”

Only the musically ignorant would listen to Handel’s Messiah and say, “It’s not quite catchy enough.”

Only the artistically blind could witness the Sistine Chapel and say, “It’s a little too involved.”

Some things are so well established and so universally recognized as greatness that to stand before them immediately puts one on trial.

Dirk Nowitzki’s performance in last night’s Western Conference Finals opener against Oklahoma City is like that. After last night, Dirk is no longer on trial. It’s those who would dare to discuss him who are being judged.

Dirk was incredible last night, eh? His game-high 48-points came in deadly efficient fashion. Fade away Js over double-teams. High-arcing one-legged fall-away Js. Off the glass. Nothing but net. Around the rim and in. Backing down defenders. Driving through defenders. Spinning moves to the baseline for a sick dunk. Dirk missed only three shots from the field. And I can’t remember any of them.

OKC tried at least six different defenders on Dirk. And he destroyed them. Ate ’em up. They tried to front him, back him, double-team him; they went big, they went small; they tried everything. Dirk drew 16 fouls from those defenders. They put 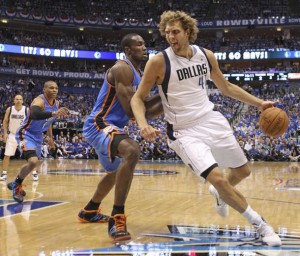 their lesser version of Dirk, Kevin Durant, on the Big German in the second half and he picked up two fouls in four seconds.

And did you notice his postgame performance? Did you recognize that it was almost as incredible as what he did for those 41 minutes on the court? Did you see the way Dirk walked off the floor just like it was another day at the office? He acted in the locker room and at the podium like he had just gone 8-24 for 19 points in a January win over the Wizards. 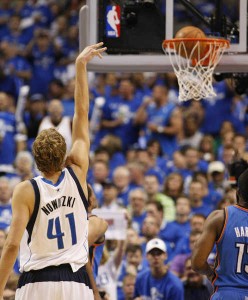