“Jesus went out and saw a tax collector by the name of Levi sitting at his tax booth. ‘Follow me,’ Jesus said to him, and Levi got up, left everything, and followed him.” ~Luke 5:27-28 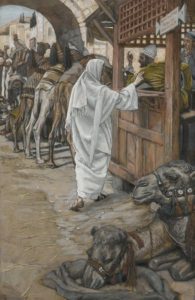 When you buy a car or a sweater “as is,” you know there’s a flaw. There’s something wrong with it.

Jesus came across the worst possible version of Levi asked him to follow him “as is.” “Come as you are.” Jesus didn’t start the conversation with a guilt trip about Levi’s past sins. He didn’t lecture Levi about his sins of the present. Instead, Jesus began a conversation with Levi with an invitation to Levi’s future. “Follow me.” Jesus didn’t say, “Levi, you can be one of us if you’ll quit your job and pay back all the people you’ve wronged and starting wearing a tie on Sunday mornings and cancel your subscription to Showtime. Do all that first and then maybe you can be one of us.”

How are you? I’m fine! Yeah? I’m great! Really? Too blessed to be stressed! I’m walking in the light!