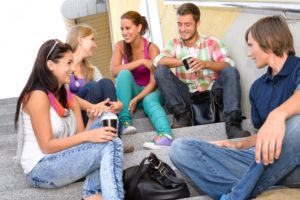 “Levi held a great banquet for Jesus at his house, and a large crowd of tax collectors and others were eating with them. But the Pharisees and the teachers of the Law who belonged to their sect complained to his disciples, ‘Why do you eat and drink with tax collectors and ‘sinners?” Jesus answered them, ‘It is not the healthy who need a doctor, but the sick. I have not come to call the righteous, but sinners to repentance.'” ~Luke 5:29-32

Let’s get this straight: Jesus made followers because he made friends. And that made waves.

Why did Jesus go to Levi’s house? To make more friends!

The religious people didn’t like the people Jesus hung out with. It ate them up. So they called Jesus names to try to intimidate him to bring Jesus back to the old traditional path. They called him a drunk and a glutton, they called him a friend to sinners. They couldn’t stand it. They despised Levi and his friends because they figured God did, too. God doesn’t like those kinds of people! What are you doing with those kinds of people?

A lot of us have got God wrong. We’ve had him wrong for a long time.

God wants to be friends with everyone. Jesus did not come here to change God’s mind about us; he came here to change our minds about God. God does not exclude anybody from his invitation to salvation. Not anybody. The Gospel is for all. If you read anything in the Bible that excludes anybody from the Kingdom of God, you’re reading it wrong.

Our Father loves everybody and he wants everybody to be saved. And community leads to conversion.

Is that you? Why?

Every follower of Jesus is a missionary. And every missionary has non-church friends. We have to! Missionaries leave their comfort zones and engage a different culture so the people in those cultures can become members of the Kingdom of God. That’s exactly what Jesus did. Instead of ignoring the people at work or the people on your street, how about engaging them? Those people could use a friend who doesn’t cuss.

When Jesus calls us to be salt and light, when he tells us to condition the world we live in,  he says salt is worthless if it loses its saltiness. Well, salt is just as worthless if it’s never used. Salt that’s never shaken at the dinner table is ready to do its good work, but it may as well be locked up in a museum if it’s going to have contact with and absorb into the food it’s meant to condition.

“Pray for us, too, that God may open a door for our message, so that we may proclaim the mystery of Christ… Pray that I may proclaim it clearly, as I should. Be wise in the way you act toward outsiders; make the most of every opportunity. Let you conversation be always full of grace, seasoned with salt.” ~Colossians 4:3-6

Pray that God will open a door. Pray that we proclaim Christ clearly. Make the most of every opportunity.