I Did Not Jinx the Rangers!

I’m being accused of jinxing the Rangers. I’m using this space today to set the record straight. I did not jinx the Rangers.

Last Thursday, in the middle of our Great Cities Missions tour of churches in Peru, Bolivia, and Chile, our group of seven took a boat trip across Lake Titicaca. Not only is it fun to say, Lake Titicaca is the highest navigable body of water in the world at an altitude of 12,507 feet. The lake sits on the Peru-Bolivia border and contains the Island of the Sun, typically known as the birthplace of the Incan civilization.

It wasn’t a good day for sailing. We began the day by walking across the Bolivian border from Peru in the snow and the sleet. Uphill. I’m still not sure why the van couldn’t come across. But the driver parked about half a mile from the border and we walked the rest. It’s winter now south of the equator. And the weather conditions made for an interesting experience. Walking into Bolivia. In the snow. Wow. (As always, click on the picture for a larger view.) 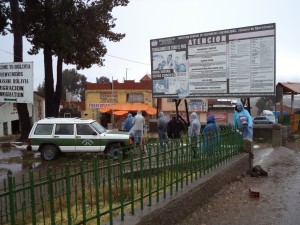 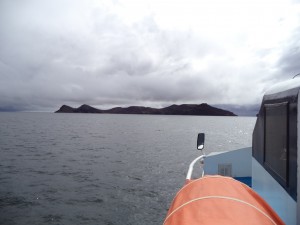 Once we received our travel visas at the immigration office — they meticulously checked our American dollars but never even looked in our bags and purses — we boarded the boat and headed to the island. Apparently, the worship of the sun by the Incan people began on this Island of the Sun. There are more than 180 Incan ruins on the island that date back to the middle of the 15th century, several little museums and shrines, zero roads or motor vehicles, and at least 800 families who still call the place home. 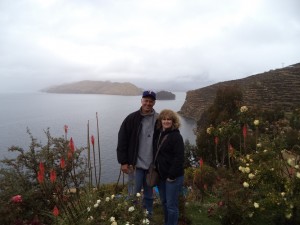 At one point of the tour, we were introduced to an island priest who proceeded to demonstrate to us the ceremonial prayers and sacrifices and rituals of his ancient religion. We weren’t quite sure how to handle this. Kelley later confessed to thinking about Romans during the ceremony and I admit I was wondering about a few passages in 1 Corinthians. But we all sat there quietly while this guy sacrificed a toy llama and some grains on a fiery altar and raised his hands to his god. The last part of the ceremony included this shaman sprinkling some kind of holy water in a sacred vase from the end of a ritual flower to the tops of our heads. I don’t have a picture of this, but Craig’s video clearly shows us nervously accepting the drops of water, and then Kelley and I immediately turning toward one another to make, what appear to be, wisecracks. 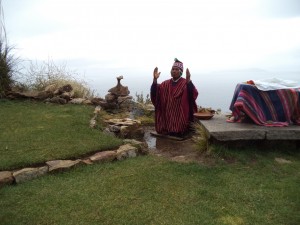 I was wearing my Texas Rangers cap. The mystical shaman had blessed my cap with the holy water from the Island of the Sun. I told Kelley, “I think this means the Rangers are going to win the World Series.” And then I glanced at Kelley’s Texas A&M hat and remarked, “But I doubt the Aggies will win the SEC.”

We laughed together and thought nothing more of it. 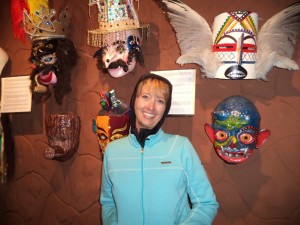 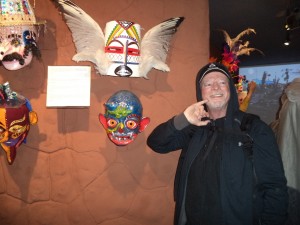 Toward the end of the tour, we stepped into a little museum which housed several different kinds of ceremonial masks. These ancient religious masks were all displayed on a large wall and we all had a little fun taking our pictures with them. There was one particular mask that stood out to me as especially creepy and, on a lark, when the tour guide wasn’t looking, I put my Rangers cap on top of it and took a picture. 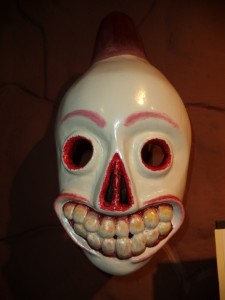 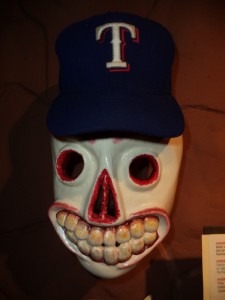 Craig accused me of breaking the rules. I answered by saying he just wished he had thought of it first. I was going to use the picture as a screen-saver on my laptop. And as we were joking about it, the lights went out in the museum. It was pitch dark. A couple of the ladies screamed and we hustled out of there as fast as we could. The tour guide said it was the snow and sleet that had probably knocked out the power. Yeah, of course.

That was Thursday. That night the Rangers lost to Toronto 3-1. Over the following three nights they lost 8-0, 6-1, and 7-2. They suffered a four game losing streak and fell three games back of the A’s in the AL West. They were outscored 24-4 during that stretch, went 1-for-20-something with runners in scoring position, and haven’t recovered since. Whatever had knocked the power out of the museum had also knocked the power out of the Rangers. It all seemed like a horrible coincidence until the news broke that A&M’s Heisman winning quarterback, Johnny Manziel, had tweeted that he couldn’t wait to leave College Station.

What had I done?

There were various explanations given by the other members of our group that included references to a Brady Bunch movie and various episodes of Scooby Doo. A couple of days later, I was tempted to dunk my cap in the holy water at the 15th century Spanish Catholic cathedral in Santiago in an attempt to reverse the curse.

But, having been back in the States now for a couple of days and having watched the Rangers play, I’m convinced their sorry streak of offensive ineptness has nothing to do with the Island of the Sun. It wasn’t me or the mysterious shaman or the religious masks. It’s injuries to key hitters and a bunch of young guys pressing too hard. Seriously, that losing skid didn’t start last Thursday. They had lost the two previous nights to Cleveland. The string of bad play was part of a nine losses in eleven games free fall that began long before I had ever laid eyes on Lake Titicaca. Plus, they’re pitching Grimm and Tepesch and Lindblom. Of course, they’re going to lose those games.

Just in case, I wore my cap backwards on the 13-hour flight from Chile to Amarillo Monday night. The Rangers won that night 8-7. They scored nine runs last night. And if they win this afternoon, they will have taken three of four from Oakland and pulled back to within one game of the A’s for the division lead.

I didn’t jinx the Rangers.

But, just in case, I’m wearing a Yankees cap the next time I visit any Incan temples.