God Always Finishes What He Starts

“…being confident of this, that he who began a good work in you will carry it on to completion.” ~Philippians 1:6 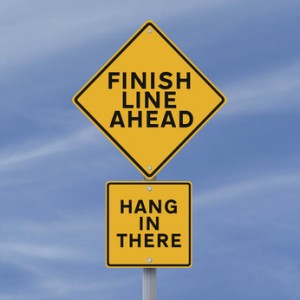 Maybe you’re thinking, “God has not started anything in me.” Maybe what you remember, maybe your past, is so troubling and so difficult, maybe your present is so bad, you don’t feel like God’s done anything.

No. God has started something in you. He has. I don’t know where you’ve been. I don’t know all the people and places and events in your life. But I do know that our God has never, ever left you. Never.

I would also say that just the fact that you’re reading this post, that you’re right now hearing the word of God and considering his eternal promises means he has started something with you. And you can trust. You can know. He who began a good work in you will carry it to

Abraham lied about his wife and had a son with Hagar instead of Sarah; but God didn’t quit. Joseph was rotting away in an Egyptian prison; but God didn’t give up. The Israelites built a golden calf and brought idols into the Temple; but God didn’t stop. David intentionally broke half of the Ten Commandments in one terrible weekend; but God didn’t throw in the towel. Peter publically denied the Christ, Paul was ruthlessly killing Christians, the evil powers of this planet and beyond had conspired to murder Jesus on a cross; but that didn’t slow God down one bit.

God has started something. Something in you. And God always finishes what he starts.