Give Away Day Still Going

Right at 160 total families, including more than 500 children, were given blue jeans and sweaters and coats and pillows and shirts this past Saturday as Legacy took Give Away Day to Siempre Familia and the Rosemont neighborhoods of South Fort Worth. Estimates range from 150 to 200 actual volunteers who worked the event. Of course, the numbers of those who built racks, transported equipment, served food, sorted clothes, and cleaned up afterward go way beyond even that.

People were served in the name of Christ. God was praised. Our Lord was given glory and honor. People who don’t know Jesus were shown his love and mercy.

And then Give Away Day ended.

But God’s work and the work of his church at Siempre Familia did not.

At least seven families who received assistance at Give Away Day showed up for Sunday night’s combination Spanish/English song service where they received even more compassion and grace; where they received an even bigger sense of community; where they made even more connections. The names and contact information for each of the families who were served were tacked up on a cross at the front of the worship center. The congregation was asked to take one of those cards, to adopt one of those families, to make phone calls and visits, to commit to taking care of these families through the rest of the year.

There’s something very powerful about reaching out to people in our own zip codes, about jumping in to our own communities with the truth of salvation from God in our risen Savior. Those of us who were there Saturday understand that much better now. There were connections being made in every conversation. There were friendships being formed and fostered with every interaction.

I walked a few people to their cars with a Christian volunteer named Raul. I don’t know how long Raul’s been a part of that Siempre Familia church. I have no idea. I’d never met Raul before. But Raul asked every person he met where they lived. Where do you work? Where do your kids go to school? How long have you lived here? And with every answer, Raul would exclaim, “I know somebody who lives on that street!” or “My cousin works there!” or “Do your children know so-and-so? Their kids go to that school, too!”

Thank you to all who gave of their time and energy and money and emotion. May our God continue to use Give Away Day to his eternal glory and praise. 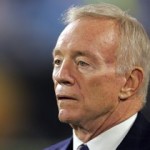 I’m not sure how Jerry Wayne can keep going the way he’s going. I don’t know how he can break from a meeting about the boxing match at Cowboys Stadium to run to the coach’s offices to mandate a lineup change to answer a phone call about a merchandizing deal with an auto parts chain to sprint down to the film room to evaluate the upcoming draft. It just doesn’t work. This 51st season of Cowboys football will go down as the most bitterly disappointing in franchise history. Does Jerry Wayne need more proof that his way won’t cut it?

One playoff win in 14 years. They’ve missed the playoffs seven times in eleven seasons. How does that make the Cowboys any different than Seattle or Carolina or the Cardinals? Oh, yeah. Those teams have all been to Super Bowls since Dallas.

I feel sorry for Wade and Garrett. And Bill Cowher or Jon Gruden. Or whoever’s going to coach this team next. It’s not fair.