I have spent five nights on two different occasions sleeping on the shores of the Sea of Galilee and each of those times I have set my alarm so I can be up and out and sitting on the banks as the sun rises above this sacred place. This morning, my sixth morning in Tiberias, my alarm went off at 5:00am and I began to get ready to go outside when I was reminded that Game Seven had probably just concluded (we’re seven hours ahead of Texas time). I thought I would just check the final on ESPN.com and head out.

So I thought I would run through all the channels on the TV just in case some station here in Israel might be broadcasting it. What are the odds? I really thought there was no way. 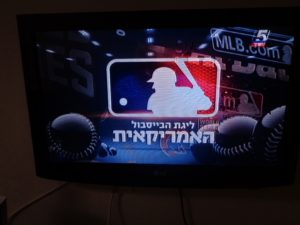 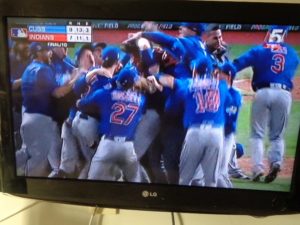 Until I found it on an all sports TV station out of Haifa, Channel 5. There it was: The World Series Game Seven. In Hebrew. They were picking up the feed from Fox and turning all the audio down so their broadcasters could call the game in Hebrew. Very strange. No crowd noise. The crawl at the bottom of the screen was going from left to right — very disturbing. And the announcers were consistently a step or two behind what the cameras were showing. I was able to pick out the teams’ cities and mascots, proper names, and, every now and then, a word like “slider” or “homerun.” But the language and time zone differences didn’t matter a bit. This was baseball! And baseball transcends all those trivial circumstances.

The very first batter I saw was Rajai Davis who hit the game-tying two-run tater. I watched it, mesmerized. The 9th inning came and went. Extras! Now what?

Rain delay. No! Now I’ve missed the sunrise. Now I’m ten minutes late for breakfast. The Cubs cream Indians pitching to score two in the 10th. Cleveland cuts the lead in half but can’t come all the way back and for the first time since 1908 the Chicago Cubs are World Series Champions.

And it’s on to Korazim and Caesarea Philippi.