We’re in a battle. God’s Church is locked in a war right now with the prevailing culture and the shifting world view. Today in the West, right now in this country where God has placed us, the prevailing culture and the world view is aligned against our Lord and his Kingdom. And it can be intimidating. We don’t live in the same world we lived in twenty or thirty years ago: 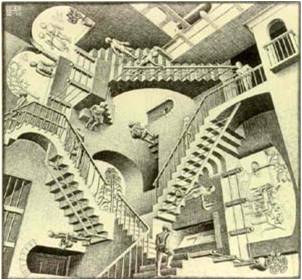 Post Modernism – We can no longer ignore or deny that the dominant world view in the United States today is post modern. The culture argues that there is no absolute truth. Nothing is inherently right or wrong, nothing is fixed as eternally correct or false. Men and women my age and younger  see almost everything today as a personal choice, a matter of individual freedom. You find peace and happiness your way and I’ll find peace and happiness my way and nobody has to get upset. Nobody has to preach to anybody. I’m doing what’s right for me; you do what’s right for you. “Yeah, but the Bible says…” Don’t quote the Bible to me! “Well, history would show…” Don’t talk about the past! Anti-institutional. Anti-authority. Anti-oppressive-religion. Don’t judge me. Don’t tell me. Don’t make me. In today’s society, the religion is individualism, the prized virtue is tolerance, and the controlling creed is “Whatever!”

And you feel it. You sense it. If you’re paying attention at all, you experience it every day.

Post Christendom – The culture in the U. S. no longer supports the Church. Today’s society doesn’t prop us up anymore. Remember prohibition? Blue laws? Prime time family hour on TV? No homework on Wednesday nights? No youth sports events on Sundays? Those helps for the church are a thing of the past. The media has an agenda, and it’s not neutral. The culture is on an around-the-clock mission to shape us, not into the image of Christ. You can’t turn on your computer, you can’t buy a loaf of bread at Walmart, you can’t go to a high school basketball game, without it being shoved in your face. Realize the only network television show on the air today that portrays drinking and gambling and materialism as bad, illicit and extra-marital sex as evil, and going to church and being honest and living right as good is The Simpsons!

Guess what? We’re on our own nowadays.

Post Denominationalism – Brand loyalty to a particular kind of church is gone today. Just because your grandparents and your parents and your spouse were all born and raised in the Churches of Christ doesn’t mean that your son won’t go to a Baptist university and meet a Presbyterian girl at a Christian concert at a community church, get married in a Lutheran chapel and raise their kids as Methodists. That kind of thing is happening all the time. You know it. Something like it has already happened in your own family.

We live in a world today we’ve never lived in before. None of us. It’s different. It looks like and it can feel like the odds are stacked against us. It’s threatening. Disorienting. We’re not sure how to tackle it. It’s all so new and it’s changing so stinking fast.

“Make the most of every opportunity, because the days are evil.” ~Ephesians 5:16

We have to do things we’ve never done for the sake of a world in which we’ve never lived. We can view the things in our society and culture that stand against God’s Kingdom today as frightening enemies or as exciting opportunities. We can shrink in the threatening presence of so much rapid change or we can rise to meet the exciting challenges head on. If we’re living in a brand new world, we must adapt and be flexible with doing brand new things.

Post Modern? Yeah, nobody’s interested in absolute truth anymore. Here at Central, we said “phooey!” to that last October and the Lord rained down over $353,000 in foreign missions money! Post Christendom? Yeah, nobody wants to go to church anymore. Last summer, we said “fine!” and we canceled church. For eight Wednesday nights in a row we canceled all our worship and classes and took church to the people, blessing our neighbors and our community with the love and grace of God. Post Denominationalism? Yeah, the lines are blurry. So, this past year we’ve partnered with the other churches in downtown Amarillo. We’re working and worshiping with them, serving and helping with them, combining our prayers and resources, consolidating our Kingdom energies, for the sake of our city.

We can’t compete anymore with the giant influence of the culture. We can’t win against the enormous scope of entertainment options. We can’t defeat the monster of technology and the almost militant individualism it nurtures. But that’s OK. That’s actually good news if we’ll just admit it. The truth is that not one single thing for the Kingdom of God is going to be won in your city with bigger programs, bigger buildings, bigger budgets, more manpower, or better technology. Instead, we should be laser-focused on raising up and encouraging the leaders in our congregations who see the tremendous potential in this new world and are excited about the Kingdom possibilities. When they propose doing something different in an effort to reach the community for Christ, don’t say, “Well, we’ve never done that before!” Remember, we’ve never lived here before.