Around the Table: Part 1 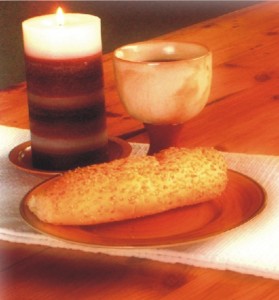 Regular readers of this space know that the communion meal is the one area of our Christian worship, the one part of our history and tradition and liturgy, that really gets me going. It’s the area in which I’ve done the most research and study and the thing about which I’m most passionate. There’s a whole lot going on around the table when disciples of Christ gather to share a meal. And I believe that on Sundays in our churches, we miss most of it.

Here at Central last night, we began an eleven week study of our Lord’s Supper that will take us from Genesis all the way through Revelation. From the Israelites eating on the mountain with God and Christ sharing that last meal with his apostles to the biblical accounts of the early church’s Christian meals to our communion beliefs and practices today, we’re going to explore Scripture and ancient practices, history and context, custom and command. And, by God’s grace, we’re going to arrive at a deeper and stronger communion theology for our congregation.

We set it up by looking at a couple of stories in Genesis. In Genesis 31 Jacob and Laban are fighting within their own family. They can’t get along. Jacob takes off with his wives and children and flocks. Laban gives chase, catches up with his daughters and grandchildren and son-in-law, and they begin to argue with one another there in the desert. After both have angrily vented, Laban proposes a peace treaty.

“Come now, let’s make a covenant between you and I, and let it serve as a witness between us… So they took stones and piled them in a heap, and they ate there by the heap.” ~Genesis 31:44-46

A similar thing had occurred in Genesis 26. Isaac and Abimelech were at each other’s throats over land and crops and flocks. There were lies. Their servants were fighting. Finally, Abimelech suggested a peace treaty.

“There ought to be a sworn agreement between us — between us and you. Let us make a treaty with you… Isaac then made a feast for them, and they ate and drank.” ~Genesis 26:28:30

The meal celebrates the reality of the peace. Eating and drinking together expresses in tangible, concrete, and visible ways the reality of the new relationship between the once estranged parties. The treaty brings about the peace; that peace is then experienced at the meal.

Just like with God and his people on the mountain.

In Exodus 19, the Lord announces a covenant for his people and the people accept the terms. “We will do everything the Lord has said!” In Exodus 20, God summarizes the terms of the covenant, which are then itemized in more detail in Exodus 21-23. This covenant is then ratified, or made official, by the sacrifices in Exodus 24:

“They offered burnt offerings and sacrificed young bulls as fellowship offerings to the Lord. Moses took half of the blood and put it in bowls, and the other half he sprinkled on the altar. Then he took the Book of the Covenant and read it to the people. They responded, ‘We will do everything the Lord has said; we will obey.’ Moses then took the blood, sprinkled it on the people and said, ‘This is the blood of the covenant that the Lord has made with you…'” ~Exodus 24:5-8

The covenant is sealed with the blood of the sacrificed animals. Both sides have made pledges, both sides have agreed, and now there’s a brand new relationship. This is it, Moses says. It’s done.

“Moses and Aaron, Nadab and Abihu, and the seventy elders of Israel went up and saw the God of Israel.” ~Exodus 24:9

And God struck the leaders of Israel dead right there on the spot. Yes? Of course! Nobody can see God and live. We know that. The original readers of the ancient text know this. The first hearers of this story knew it. You can’t see God. Duh! You and I have always known that. He is holy, we are not. He is righteous, we are not. He is perfect and transcendent and above all else and we are certainly not. A person cannot see God and live. It just doesn’t work that way.

That’s why the next line in the story is so dramatic. That’s why what happens on the mountain is so extraordinary and shocking; scandalous, even!

“But God did not raise his hand against these leaders of the Israelites; they saw God, and they ate and drank.” ~Exodus 24:11

These high priests and Levites and leaders of God’s people, representing all of Israel, ate and drank a covenant meal with God. They were face to face with the Creator of Heaven and Earth, at his table eating and drinking with him in the reality of a brand new kind of holy relationship. God’s people had been washed by the blood; there were made righteous by the sacrifice. The blood had rendered them perfect in the eyes of God and allowed them to enter into his presence. The sacrifice allowed them to commune with God. They were not killed when they saw him. God did not strike them dead when they came into his holy presence. He welcomed them with a fellowship meal of food and drink. They celebrated the reality of the relationship, the reality of their salvation, by eating and drinking with God.

Jesus himself, the apostles, all the New Testament writers and readers, and certainly the early church all live in a context of a clear distinction between altar and table. The altar and the table are two different things; there are two completely different forms, entirely different functions between the sacrifice and the meal. Those differences were established and understood by generations and centuries of teaching and practice.

In many ways we have combined the two. Down through the centuries, God’s Church has actually turned the table into an altar. It has destroyed the original form and function of the table. The intent of God’s table and our Lord’s meal has been terribly distorted. The aim of our study is to restore our understanding of the feast, if not our Sunday assembly communion practices.

I’m excited about our study. I’m thrilled already with the early response. By God’s grace, going forward, his Gospel and our salvation in Christ Jesus will be better experienced and more fully expressed around the table here at Central.