“Don’t plant anything up here until after Mother’s Day.” “We’ve had ten-inch snows in May before.” 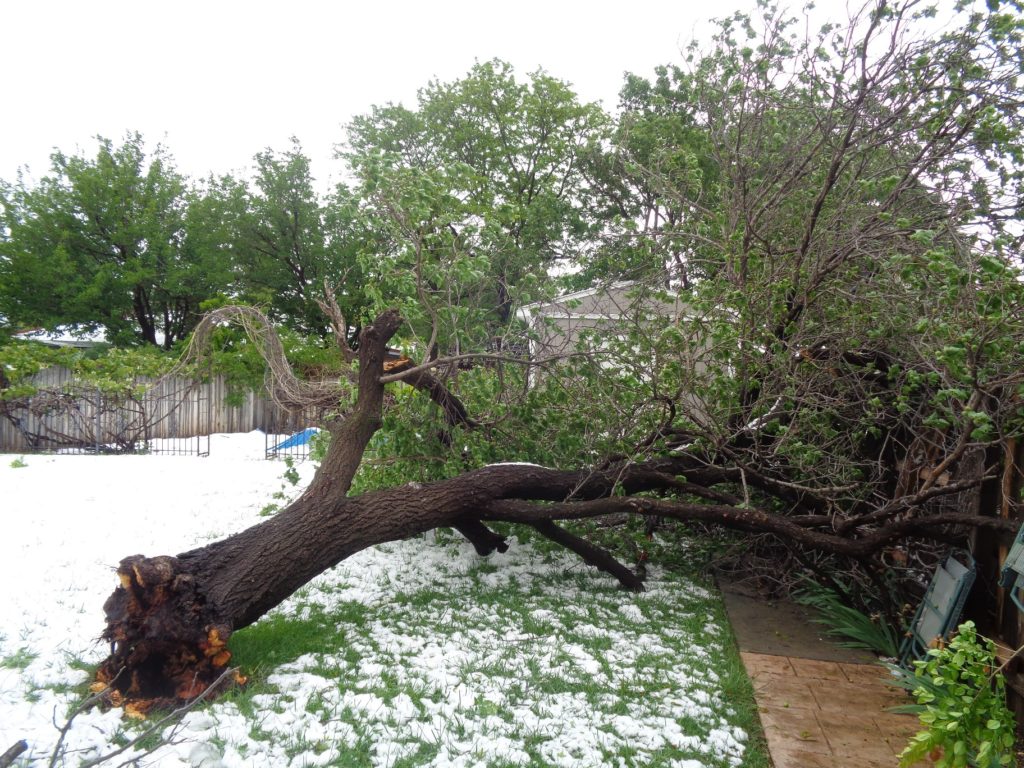 We’ve survived six winters now in Amarillo and I’ve heard the above statements at least a million times at the end of each of those winters — friendly warnings from people who’ve lived her a long time. I’ve generally nodded kindly as a response but I’ve never waited until after Mother’s Day to plant. Snow in May? No way! A hard freeze at the end of April? Give me a break. Maybe way back then, but not recently. April 15 has been my magic date to do my spring planting and, so far, I’ve not had any problems.

The garden went in two weeks ago — three kinds of tomatoes, two varieties of jalapenos, okra, squash, radishes, cucumbers, and zucchini. The Begonias went in and my hanging baskets went out.

Then last Monday they started talking about freezing temperatures Saturday night with some snow. By Wednesday they were predicting lows around 30-degrees and maybe an inch or two of snow in Amarillo. By Friday nobody was saying “maybe.” And when I woke up yesterday morning it was 35-degrees and snowing. The radar was showing snow all day Saturday, all night Saturday night, and right on through Sunday morning. And the lows were going to be right at the freezing mark. 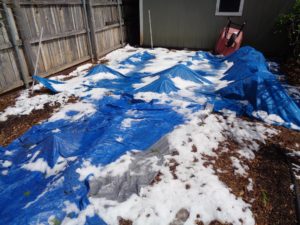 So, in the freezing wind and the blowing snow, I worked for about an hour to cover all my tender shoots and vegetation with old paint buckets and trash bags. Then I laid two giant tarps over the entire garden and secured it with about two dozen bricks around the edges. I also covered up the Begonias and brought in the hanging baskets. Disaster averted. Adventure had. The madness of the panhandle weather was not going to beat me!

And it kept snowing. And kept snowing. All day. All night. The temperature never got below freezing — the official low at the Amarillo airport this morning was 33-degrees — but it snowed so much that everything above ground was affected. Lots of tree damage in our Puckett neighborhood this morning, including the total loss of our backyard apricot tree.

The tree is over 20 feet tall. Not the prettiest tree on the property. Weird branches sticking out at strange angles. It always oozed a weird, thick, brown sap that dripped on part of the sidewalk and fence. But the weight of the snow and the force of the 45-mph winds snapped it off at the ground sometime between 6:30 and 8:30 this morning. I’ve never seen anything like it. Not from snow. 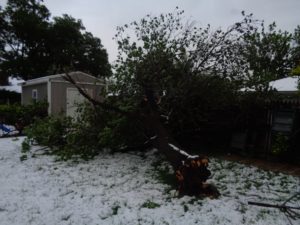 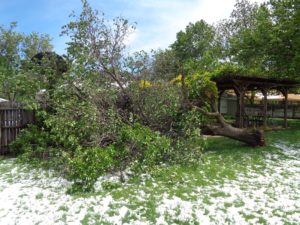 Lots of people lost some really big branches last night and early this morning. I’ve seen some trees today split right down the middle by this fluky early spring snow. But so far, mine is the only whole tree I’ve seen snapped off at the stump.

The snow is melting quickly today. It’s up to 43-degrees right now at 3:15pm and the sun is out. I’m getting ready to pull the tarp off the garden and uncover the Begonias so they can soak up some warmth and get their core temperatures back up. Hopefully, I did everything right and saved most all I had planted. By that, I mean, everything short of waiting until after Mother’s Day to plant.