My week in Malibu with three other Central ministers and four other Central members did not alter my physical appearance. The scratches on my arms and face were not sustained in a surfing accident and the extra sun my skin is reflecting today was not soaked up on a California beach. I spent twelve hours in my backyard Saturday with a chainsaw taking care of the 25-foot apricot tree we lost in that freak snow storm last weekend. As for my week at Pepperdine, it was fabulous. Lots of excellent classes and keynotes by some of the best preachers and teachers in Churches of Christ, lots of catching up with friends from other churches, lots of really great worship and music, and, yeah, some really good seafood.

Of course, when Greg and I (and Justin this time) go to Pepperdine, we fly out a day early so we can catch a ball game the night before the lectures begin. This time it was the Dodgers and Giants at historic Dodger Stadium. We saw Clayton Kershaw get knocked around in an exciting one-run loss; watched a loud, obnoxious, potty-mouthed Giants fan three rows behind us get taken out by security; ran into my great friends Jason Reeves, his wife Tiersa, their daughter Kasey, and Crazy Ray; and nearly ate for the cycle. 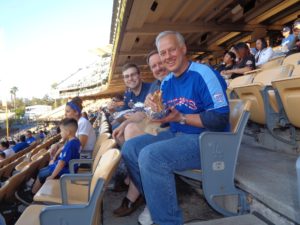 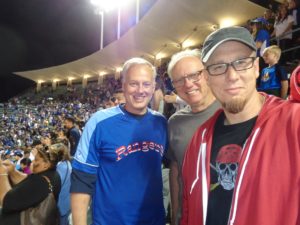 We spent Tuesday morning and early afternoon in Hollywood. First, we took the long way on a three-mile hike to the top of the Hollywood sign in the Hollywood hills. Sure, everybody gets a picture in front of the sign; but who takes pictures from behind and above the iconic landmark? That’s right, we did. And it only took three hours to get there and back. We followed that up with lunch at the Hard Rock Café on Hollywood Boulevard (the Frankenstein guitar Eddie Van Halen played at the Whiskey-A-Go-Go in 1977 is on display there along with Jim Morrison’s disgusting leather pants), took pictures in front of the Chinese Theater and along the Walk of Fame, ate amazing ice-cream sundaes at Ghiradelli, and avoided eye contact with counterfeit super heroes and wannabe rap stars. 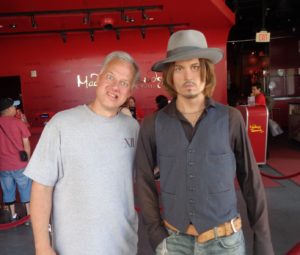 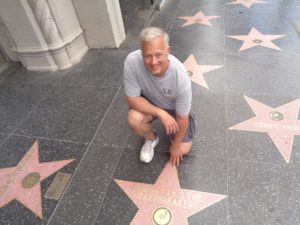 But, Pepperdine. Wow. You know, I recall having a difficult time concentrating on my studies at Oklahoma Christian University. I can’t imagine how these kids study Geometry and History at Pepperdine. Palm trees and beaches and mountains — all the distractions you can imagine that come with a university situated in Malibu. To hold an audience’s attention at a church conference in this beautiful setting, you’d better schedule compelling speakers like Randy Harris, Don McLaughlin, Rick Atchley, Mike Cope, Rick Marrs, and Bob Goff! You’d better talk about important spiritual and practical matters like racial reconciliation, personal and corporate evangelism, finding Christ in a worship assembly, the Christian sex ethic, and unsticking stuck churches. And you’ve got to provide nice cushioned chairs.

May is an incredibly busy month. Starting it off at the Pepperdine Bible Lectures would always be my recommendation.