An Evening with Lonesome George

Blues rocker George Thorogood brought his Destroyers to Midland last night on his “Good  To Be Bad: 45 Years of Rock” tour, and Carrie-Anne and I were sixth row, center stage for the show. It was an hour-and-a-half of Lonesome George’s greatest hits and most familiar songs and I was more than delighted to be there. 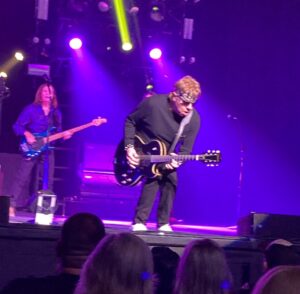 George Thorogood is not a mainstream classic rock icon – he  didn’t even sell out the 1,800-seat Wagner-Noel Performing Arts Center last night. But it’s hard to imagine rock and roll even existing without “Bad to the Bone” and “Move It On Over.” Especially “Bad to the Bone.” That opening guitar riff. The stuttering “ba-ba-ba-ba-ba-baaaad!” It’s one of those songs that feels eternal, like it’s always been there. And to be in the room with the man who wrote and recorded that song, the man who’s performed that song for more than four decades, a song that everybody in the entire world knows, is really some kind of experience.

The show opened with the house lights completely down, the whole room totally dark, except for a single purple light on the back wall of the stage. Then Barry McGuire’s classic protest song, “Eve of Destruction,” began blaring from the speakers. The whole thing from start to finish. That song was recorded in 1965 but, man, the lyrics could have been written this morning. It’s disturbing. “Violence flarin’, bullets loadin’; you’re old enough to kill, but not for votin’.””Handful of senators don’t pass legislation.” “Marches alone can’t bring integration.” “Hate your next door neighbor but don’t forget to say grace.” It’s unsettling. And real.

Then George strutted onto the stage and the world’s only five-man trio tore into “Rock Party” and it was on. Ninety minutes of hard-core bluesy-boogie rock and roll. “Who Do You Love?” “Night Time.” The cult-classic “House Rent Blues.” The aforementioned “Bad to the Bone” and “Move It On Over.” And two songs from my favorite George Thorogood album, “Maverick,” “Gear Jammer” and “I Drink Alone.”

That “Maverick” album was released over Christmas 1984-85, just a week before my last semester of high school. The Zoo, 98FM, the station we all listened to in Dallas, played that opening track, “Gear Jammer” like crazy that whole spring and summer of 1985. The guitar in that song is just blistering. Fast and frantic. The solo in the middle is borderline heavy metal. And I absolutely ate it up. I wore out that “Maverick” cassette tape in my ’74 Monte Carlo all through my last months of high school and up and down I-35 on my way to and from Oklahoma City during college. And to watch Lonesome George burn that song up last night was exhilarating for me.

It’s not quite as exhilarating for Carrie-Anne. She goes with me and sits respectfully through the whole thing; she’s a trooper. But it’s definitely not her bag. I think she’s amused at my enjoyment in watching a 73-year-old man play guitar and sing an old song. And that’s about it.

It is pretty interesting to watch these old rockers in concert. Some of them age really well. And others not so much. Guys like Tom Petty and ZZ Top’s Billy Gibbons and Bad Company’s Paul Rodgers understand their age and the age of their audience and they act appropriately. They don’t pretend like they’re in their 20s. Or that we are. They sing the songs we all love, show appreciation and grace, self-deprecate about their age and their past, and really connect with the fans. George Thorogood didn’t do as well in that category last night. He acted like he was forty years younger than he is. He was trying too hard to be cool and sexy. “I’m going to do everything I can to get arrested tonight!” It was strange. “I belong to AU! Alcoholics Unanimous!” Don’t say that, grandpa. It was a little uncomfortable at times. A pelvic thrust from a pudgy 73-year-old man who’s sweating and out of breath doesn’t work. At one point, George hollered, “Isn’t it great to be 17 again!” No. Wait. That’s weird. 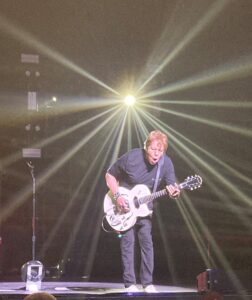 When the encore was complete and the band exited the stage, the “Star Spangled Banner” began blaring over the speakers. No lyrics, just the music, the familiar U.S. national anthem, a full orchestra recording, big sound. What? The whole song. Empty stage. The audience filing up the aisles and out the doors. While the national anthem played.

“Eve of Destruction.” “Star Spangled Banner.” The show in the middle.

This is the world we live in; be reminded that everything’s pretty awful. Here’s some diversionary fun; have a good time with your music and your friends. Now back to pledging allegiance to the mess. Put your hand over your heart and act like nothing’s happening, like nothing needs to change, like everything’s okay. Maybe? I don’t know. There was no explanation. That’s the thing with art. If it’s done well, it will provoke you to serious reflection and thought. Even at a frivolous rock and roll concert. Or you can ignore it, I guess.

I’m still thinking about it today. Trying to figure it out. Well done, George. Thanks for coming to Midland.