You Make Me Great

“You give me your shield of victory,
and your right hand sustains me;
you stoop down to make me great.”
~Psalm 18:35

I don’t always feel great. Maybe you don’t, either.

But, we are great. We are VERY great!

The Creator of Heaven and Earth has condescended to us. He’s come down to us. He put on our flesh and he took on our sin. He has chosen to live inside us. He makes us great!

God stoops down to make us great.

I was amused a couple of weeks ago when the local television station here aired a story previewing the Amarillo City Commission’s consideration of a city wide ban on driving while talking on a hand-held phone. The recommendation had been made by the city traffic commission and the city council was prepared to approve it. Pretty soon, the reporter predicted, we won’t be able to hold a phone and drive on any Amarillo streets or highways. And the notion of such a ban was lauded, not only by those quoted in the story, but by the reporter herself. That story was followed immediately by news that concealed handgun permits are easier to get in Texas than in any other state and that permit holders in Texas can get handgum permits from other states just by going on-line and answering a couple of questions.

The Amarillo city commission made it official last night, voting 4-1 to approve a city wide ban on cell phone use while driving. 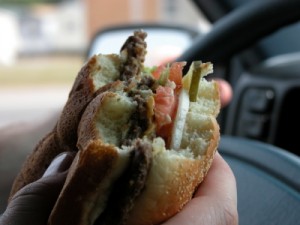 Most researchers will tell you that tuning the car stereo or changing out a CD is much more dangerous than talking on a phone. Eating while driving and having conversations with other people in the same vehicle are also higher up on the lists of driving distractions that cause accidents than cell phone use. I was on my way to Whataburger this afternoon, reading the article on the front page of today’s newspaper, while driving, when a police officer pulled up beside me. And the absurdity of the whole situation struck me: it’s OK for me to read the paper while I drive, but not OK to talk on the phone. It’s fine for me to eat a loaded cheeseburger while driving, balancing the ketchup on my knee and the 44-ounce drink between my legs, steering with my elbows while playing UNO with my kids in the backseat; but it’s against the law for me to talk on the phone.

There’s not much logic involved with this decision, right?

Even the city leaders who are voting on this aren’t certain as to why they’re approving the ban. A city traffic commissioner is quoted in today’s article as admitting that studies on driving with hand-held devices are inconclusive. “It’s very difficult to prove,” he says. “What we see day to day… that’s what I’m basing my thinking on.” A city council member is quoted in the same story as admitting that there’s no way to test whether bans on texting or talking while driving will have any impact on roadway safety. But she voted for the ban anyway. Mayor Harpole has attempted to restore sanity to the process by pressing for a ban on texting but letting city residents decide the talking issue at the ballot box in May. But it got nowhere. There’s way too much publicity right now, way too much hype, too much pressure to outlaw cell phones.

Doing something — anything! — even if it’s the wrong thing seems to be preferable to doing nothing.

The mandatory second reading of the ordinance and vote, which is only a formality now, will take place next Tuesday. The signs will go up and the $500 fine will go into effect before the end of the year.

Go ahead and put on your makeup! Shave your beard! Eat your lunch! Read your horoscope! Pop in a CD and light up another cigarette! Most researchers say all those things are much more dangerous behind the wheel than talking on the phone. But those researchers don’t have the vote.

On a much more positive note, the Texas Rangers magic number is 19! The Rangers are any combination of Texas wins and Oakland losses that equals 19 away from their third consecutive AL West title. The division lead is down to just three games over the A’s, the slimmist margin they’ve held since before the All Star break. And the Rangers do play the A’s seven times in the last ten days of the season. So, unlike the past two years, this one is definitely going to still be up for grabs heading into the season’s final week. But, I’m confident enough to start an official countdown to the crown without worrying about jinxing the team. The number is 19! And counting!