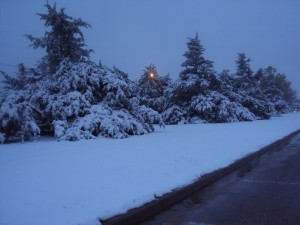 I had heard the forecast as I was leaving Amarillo for Arlington Monday morning: slight chance for snow flurries late Wednesday night into Thursday morning. Of course, I blew it off. Snow in October? Yeah, it’ll get cold. It might rain a bit. But it’s surely not going to snow. By yesterday afternoon, the weather forecasters were pretty sure we could get an inch or more. It started raining once everybody got home from church. And when we woke up this morning, there it was!

Thirty-one degrees. Strong north winds. And over an inch and a half of snow and still falling. Little tiny slushy snow flakes, blowing around in the breeze.

It’s still October! Where in the world have we moved to?!? 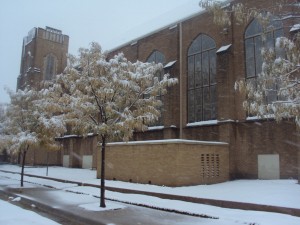 Royse Anne texted Carrie-Anne at about 7:30 this morning: “Welcome to Amarillo!” My first text came from Dan Miller: “Pump your brakes, don’t slam them.” Then Bentley texted me: “Forgot to tell you about the early snows. Get used to it.”

I actually love it. It’s beautiful. It’s exciting. It’s unexpected. It puts everybody in a good mood. And it reminds me all over again that our God is really in control. This is his planet. It’s his creation. It’s his weather. He’s in charge. And I should learn to expect his surprises. Whether it’s an October snow, or a move to a new church in a new part of the state, or a new insight from his Holy Word, our God is active and working to keep me aware of his presence in my life and in his world. 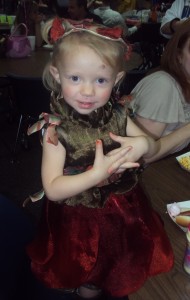 We held our Fall Festival last night here at Central and it was a blast! Lots of booths. Lots of candy. Lots of costumes. Hot dogs, games, and prizes. But, mostly, inter-generational family fun.

What a blessing to see our older people helping our littlest kids. What a joy to watch our white hairs play with our toddlers. What a beautiful portrait of passing on the faith. Acting like family. Looking out for one another. Commenting on all the Ninja Turtles and Disney princesses, congratulating the Buzz Lightyears and ladybugs, laughing with the teenagers.

points to one consistent factor. All of the studies say there is one thing that will determine whether a kid stays in Church. It’s not youth group. It’s not worship style. And it has nothing to do with technology. It’s relationships with adults outside their immediate family. Those young people who have adult friends in their churches— people who care about them, people who spend time with them, people who ask them how they’re doing, people who go out of their way to be with them — are much more likely to stay in God’s Church once they leave for college and then remain in the Church through their adult lives.

That’s why events like last night are so important. That’s why we need to be much more intentional about mixing our generations in our churches. Segregating ourselves according to age in our Bible classes and our worship assemblies isn’t doing us any good. Regularly getting people of all ages around the table together is critical to passing on the faith.

Of course, we know this. It only makes perfect common sense. But it takes sacrifice and service. It demands putting the needs of others ahead of our own. It means being like Jesus. And we’re

I keep thinking events like Fall Festival will help. All of the good things we experience during those two hours we’re all mixed up together will eventually bleed over into the ways we re-think Bible classes and worship assemblies and youth ministry and senior adult ministry, right? At some point we’ll all WANT to be involved in the lives of people who are older or younger than us because we’ve experienced the tremendous benefit, right?

Nothing can stop Game Six tonight. It’s going to happen. And the Rangers are going to win it. I keep thinking that this extra day off is going to benefit Texas. I keep thinking that it’s bad for the Cardinals players to have to spend an extra day in their town listening to all the second-guessing, being exposed to all the negative energy, being hammered one day by all the questions. They gave the Rangers their best shot in Game Five. Carpenter was on the hill and they had runners in scoring position in at least seven innings. And they still got beat. I think that gives Colby Lewis and the Rangers tons of confidence. And I think having to live with that for three full days is going to weigh adversely on the Cards.

If you want some good stuff to read between now and first pitch at 7:05, here’s a really good article by ESPN’s Jayson Stark on just what the Rangers are trying to accomplish with their first ever World Series win. A Texas victory could start a major cultural shift in the regional sports landscape.

This is a good column by ESPN’s Gene Wojo about Jon Daniels and Ron Washington. The angle is that the movie Moneyball is about the wrong GM. It should be about Daniels.

Here’s a link to the Texas Rangers official website. And, finally, you can’t really watch a Rangers playoff game without first reading the Newburg report. Especially this one.