Turn Out The Lights

I didn’t get the news until about 8:45 this morning, right before our church staff meeting. My sister, Rhonda, texted 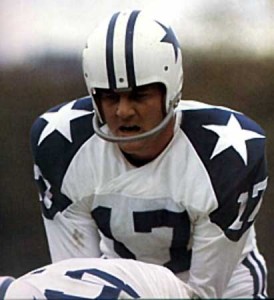 Dandy Don is dead. Turn out the lights…

Our Youth Minister, Jason Brown, walked by my door. I told him, “Don Meredith has died.” Jason looked at me with a blank stare. “Who’s Don Meredith?”

I know. I just shook my head. Dismissively.

Don Meredith, the very first Dallas Cowboy, signed to a personal services contract in the fall of 1959, months before the franchise was admitted into the NFL. All-America quarterback for SMU. Captained the Cowboys from 0-11-1 expansion futility to the brink of glory as “Next Year’s Champions.” (Eddie LeBaron was only a caretaker until the future of the franchise, Meredith, could be ready.) Cowboys Ring of Honor. Monday Night Football icon. Movie star. Life of the party. Legend.

Meredith never got along with Tom Landry. A quarterback who sang “Honky Tonk Angels” in the huddle during the fourth quarter of division games, of course, would rub the Stoic One the wrong way. Landry never thought Meredith worked hard enough or took things seriously enough. Dandy Don thought Landry needed to lighten up. The two made it work and, I think, earned each other’s respect until Meredith was too beaten up physically and emotionally to take it anymore. He always regretted that, on the day he walked into the coach’s office to announce his retirement, Landry didn’t try to talk him out of it.

He was under appreciated as a Cowboy.

Nobody was tougher under the circumstances. Nobody endured more. Nobody took more abuse. Nobody ever exhibited the same grace. Quarterbacking that lousy expansion club full of walk-ons and other team’ rejects as well as he did should be seen as the heroic thing it was.

“Number 17 in your program, number one in your heart.” 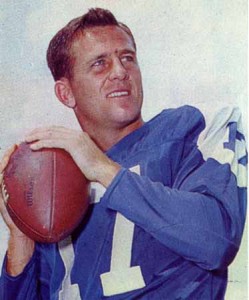 It’s sad that a lot of really good people don’t get their due, they don’t receive the recognition, until they’re dead and not around to experience it. I’m thinking that’s what’s going to happen with Dandy Don. We’ll see clips on the news tonight of Meredith throwing long passes in a near-empty Cotton Bowl, eluding would-be tacklers as the pocket breaks down yet again, stomping around in the ice in Green Bay. ESPN will bring us tons of his best barbs and one-liners from the ABC broadcast booth at the expense of Howard Cossell. And they’ll all talk about what might have been. If Landry could have relaxed a bit, then Meredith would have excelled and would be considered one of the all-time greats. Meredith was great but the team around him was so lousy.

As Dandy Don himself always said: If “ifs” and “buts” were candies and nuts, we’d all have a merry Christmas.

Turn out the lights, the party’s over. They say that all good things must end.