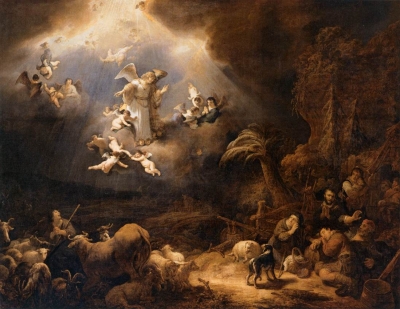 “The grace of God that brings salvation has appeared to all people!” ~Titus 2:11

This grace of God, this coming of Jesus, his flesh-and-blood birth as a human baby in Bethlehem — it has been made manifest to all people. This is what the angels told the shepherds the night Jesus was born: This is good news of great joy that is for all the people.

When Jesus is just 2-1/2 months old, Joseph and Mary take him to the temple in Jerusalem where they run into an old man named Simeon. The Gospel says Simeon is righteous and devout and he is waiting. Waiting for the consolation of Israel. Waiting for deliverance, waiting for rescue, waiting for God’s salvation. And the minute he lays eyes on Jesus, he takes the baby in his arms and he praises God.

“Sovereign Lord, as you have promised… my eyes have seen your salvation, which you have prepared in the sight of all people!” ~Luke 2:29-31

Christ has appeared to all people. Simeon is holding a baby, but he sees the saving grace of God.

Anna is there that day, too. She’s an old widow lady, a prophetess, the Gospel says. And Luke tells us she never left the temple. She worshiped there night and day, fasting and praying around the clock. Anna was at church every time the doors were opened. And as soon as the baby Jesus appeared to her

“…she gave thanks to God and spoke about the child to all who were looking forward to the redemption.” ~Luke 2:38