The Stakes Have Never Been Higher

“In the front pews the old ladies turn up their hearing aids, and a young lady slips her six-year-old a Lifesaver and a Magic Marker. A college sophomore home for vacation, who is there because he was dragged there, slumps forward with his chin in his hand. The vice-president of a bank who twice that week has seriously contemplated suicide places his hymnal in the rack. A pregnant girl feels the life stir inside her. A high-school math teacher, who for twenty years has managed to keep his homosexuality a secret for the most part even from himself, creases his order of service down the center with his thumbnail and tucks it under his knee. The preacher pulls the little cord that turns on the lectern light and deals out his note cards like a riverboat gambler. The stakes have never been higher.”

I’ll forever be amazed by the great mystery of preaching. I have very little idea how it works. I don’t know how God’s Holy Spirit overcomes my inadequacies, my shortcomings, my sins, and consistently delivers the Word directly into the hearts of the people who need to hear it. I’m not sure how our Father uses the proclaimed Word to comfort people, to challenge people, to transform people more and more into the perfect image of his Son.

But I’m humbled to be in the middle of it.

The stakes are high every single time I dare step into that pulpit and attempt to speak a faithful word from God. There 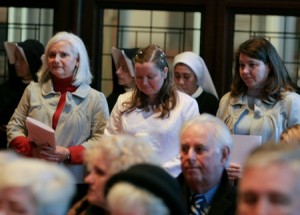 are people leaning in to listen whom I’ve never met. There are people present who are only there because they mustered up every piece of physical and emotional strength they had to make it; and they might not be back. There are angry people who believe God is mad at them. There are proud people who are hiding sin. There are hopeless people desperate for a word of grace, dying for a glimmer of redemption.

And I’m going to say something to them that will make an eternal difference in their lives?

No. No chance. It’s impossible.

I mean… yes, of course. Absolutely. It happens every Sunday.

By the grace of our God and the truth of his Word and the power of his Spirit, it happens. And I am humbled. And forever amazed. And trying desperately to be worthy of it all.

I don’t want to jinx anything. I know it’s early. And things aren’t nearly as certain as they were this time last year. It’s terrifyingly close. Too close. But we’ve got to start keeping track of the magic number.

The Rangers’ magic number is 17. Any combination of Rangers wins and Angels losses that add up to 17 will give the Rangers their fifth division title in franchise history and send them back to the postseason. According to coolstandings.com, the Rangers have a 91% chance of making the playoffs. And the way they’re playing right now, I believe it. Ceej got his first ever complete game shutout last night for his 15th win of the year. The Rangers have now

broken their club record for shutouts in a season with 18. Murph and Kins are smashing the ball all over the field. And it’s starting to look like Mike Adams is this year’s Cliff Lee.