The Punch and The Code 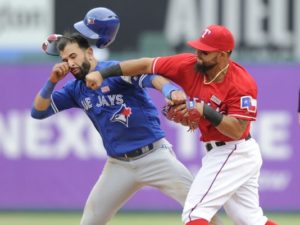 I am still baffled by the events of the eighth inning of Sunday’s game between the Blue Jays and Rangers in Arlington. Baffled. I am confounded by the punch, by the slide, by all the decisions made by managers and players, and by the power of the code.

While a lot of you are praising Rougned Odor and taking great joy in his haymaker to Joey Bautista’s jaw and vilifying Bautista as an arrogant such-and-such who got what he had coming, allow me to note that if the tables were turned, you’d be feeling just the opposite. I’ve never seen a punch like that in a baseball game. Never. Not like that. Wow. And, yes, as a Rangers fan, I really dislike Bautista. But if Odor were a Blue Jay and Bautista were a Ranger? Come on. As Seinfeld once famously observed, we’re all just rooting for laundry. Odor is more regularly criticized by baseball people as a dirty player than Bautista.

And please stop comparing this to Nolan Ryan’s handling of Robin Ventura in 1993. Nolan was a universally revered legend and hall of famer and widely-acclaimed good guy. Ventura was a young kid, a good kid, who made a terrible one-time mistake. This thing Sunday was between a couple of guys with shaky reputations and histories of being punks.

But, this post is about the power of the code, not the character of the two players or the violence in our popular sports that we Christians cheer and/or ignore.

In my rational brain, I want to believe Bush’s pitch that nailed Bautista in the side to start the eighth inning was an accident. My head keeps telling me there’s no way they put the tying run on base in the eighth inning. It was a bad pitch that got away from a nervous pitcher in a pressure situation in only his second MLB appearance. But my gut keeps saying it was a pitch with a purpose. It was intentional all the way. Bautista had upstaged the Rangers in that playoff game seven months ago, he had over-celebrated that three-run, series-clinching homer, and he still needed to pay. In front of the home fans. And this was the last chance.

That’s the power of the code.

You’ll go insane trying to figure out the code. The code in baseball says it’s not OK for you to flip a bat after a dramatic home run, but it’s quite fine and even expected that you’ll slide cleats up into a second baseman in retaliation for a supposed slight. It’s not cool to trot around the bases to show up a pitcher. It’s disrespectful. But it’s good and even expected that you’ll drill him with a 97-miles-per-hour fastball the next time he’s at the plate. It’s kooky, this code.

But that code is what compelled Rangers manager Jeff Banister to order the beaning and put the tying run on base in the eighth inning. The code is what prompted him to risk the win in order to send a message.

The code is also what caused Bautista to illegally slide into Odor.

Bautista knew that if he came in on Odor at second base with a slide that has been made illegal this year by Major League Baseball, it would result in an automatic double play and the inning and the scoring threat would be over. But he did it anyway. He was willing to risk the win in order to send a message. He knew what he was doing. Several times this year, games have ended on these automatic double plays after an illegal slide into second. It’s happened to the Astros twice. It’s been much debated and publicized. It’s already happened to Bautista this year in a game against Tampa Bay. He cost Toronto the game with an illegal slide. But he went ahead with it Sunday, knowing he would end the inning, in order to uphold the code.

This code is more important than the game. That baffles me.

I remember one night in ’02 or ’03 sitting next to Steve Busby in the Ballpark press box. He asked me if I was ready for Jay Gibbons to get it. Gibbons was an outfielder for the Orioles who had hit a homerun against Texas the year before and over-celebrated. Both dugouts cleared and exchanged the typical pushing and shoving and tough words. This night was the first game between the opponents since that dust-up the season before and Busby was preparing to talk about it during the post game show. He said both teams were anticipating it. It was going to happen.

Nothing happened that night. But it happened the following night. Gibbons got plunked. I can’t remember who did it. There was some pushing and chirping and then it was over. Score settled. Everybody was good.

That really opened my eyes to the power of the code. It’s weird. But it’s real and everybody understands the deal.

Odor took things to the next level in dramatic fashion Sunday. Bautista was planning to come hard at second base, exchange in one more round of pushes and shoves, both dugouts would clear, and it would be over. The scores would be settled. Everybody would be good. Well, it’s a little tricky sometimes deciding just when things are even.

The code is enforced within the rules during play in a football game; violence and retaliation are part of the game’s DNA. The code is enforced immediately on the very next face-off in hockey; nobody waits until the next period, much less the following season. There is no known code in basketball, no understood avenue for settling scores there. That’s why brawls in basketball games are viewed as horrible harbingers of the apocalypse. But in baseball, it’s there. It can take months, but it’s there. And managers and players will risk a win in an important game against a league rival in order to enforce it.